Gay couple hands out rainbow masks on the streets of Poland 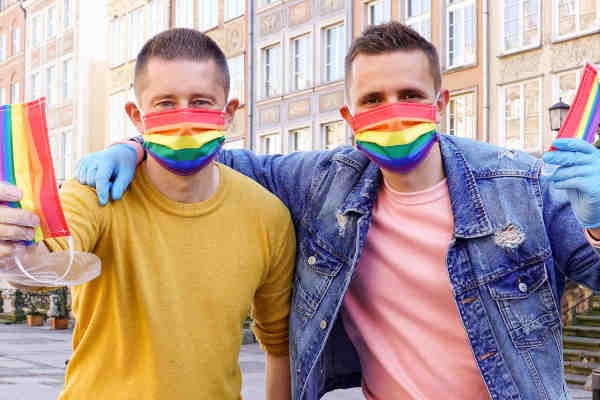 A gay couple's video of them handing out rainbow masks on the streets of Poland has gone viral.

Jakub and David handed out 300 masks they sewed themselves with one of their grandmother's sewing machine. As of Monday, Poland has nearly 9,000 reported cases of COVID-19, with 362 deaths.

Anti-LGBT rhetoric is high in Poland, where LGBT-free zones have been created. Almost 100 municipalities – nearly one-third of the nation – have adopted non-binding resolutions against "LGBT propaganda."

Jakub and David said that they were handing out rainbow masks to counter the "real plague."

"Many Polish people call us a plague, so we thought if we help people overcome real plague, they might change their mind," Jakub explained. "I know it's naive, but if we can do something good then why not?"

In the video, the men are seen happily distributing their masks on the streets of Gdansk, Gdynia, and Sopot. Many passersby question whether the masks are really free. Yes, the men respond.

"Many LGBT-free zones were created in our country, so we were a bit afraid [of] how people would react but they were really touched by our idea. I think they really appreciated that someone cared about their health. It was great to see that [the] rainbow didn't scare people but will help them stay safe," they said.

The video has been watched over 2 million times on Facebook.

The couple regularly posts music videos on their YouTube channel. Their video last year of Taylor Swift's "You Need To Calm Down" accumulated more than 250,000 views.