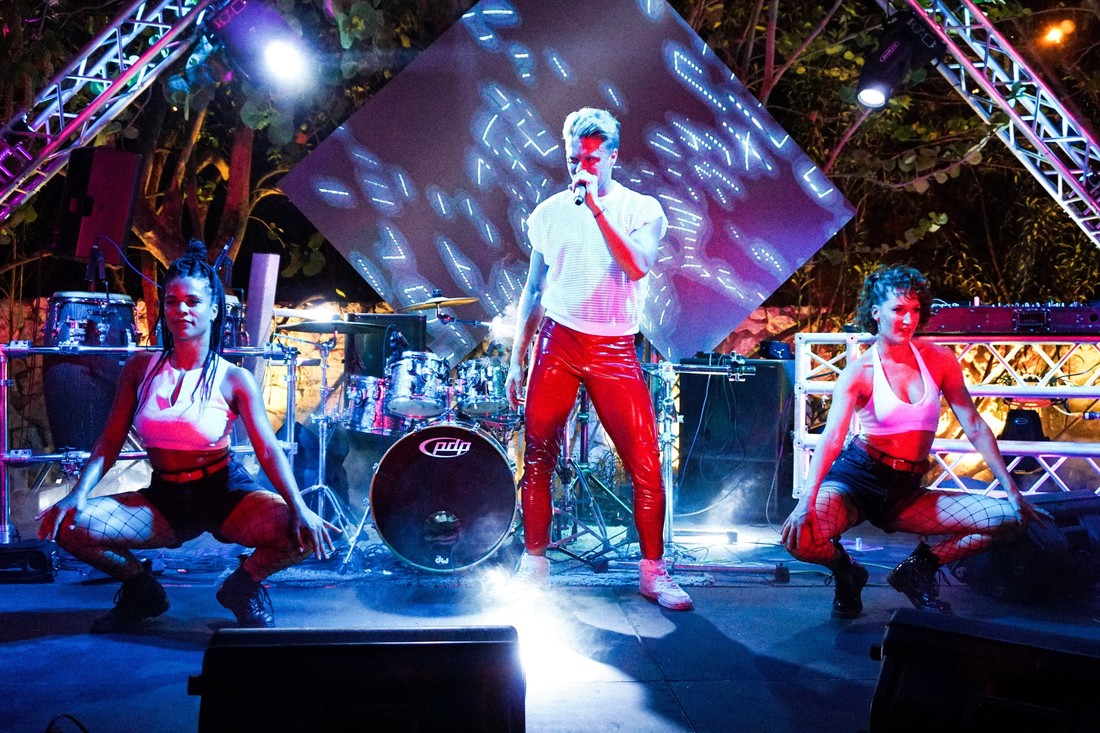 Though he has only been solo singing artist since this past January, Paul Morris has already landed gigs – and cheering crowds – around the world, including at Amsterdam Pride, Hague Pride and Curacao Pride. And the singing sensation from Caracas, Venezuela also has song in Spain, Germany, Austria, Switzerland and elsewhere.

"I love performing for a mixed, international audience. It's a joy to see how people from different corners of the world all can enjoy the gift that is music, and it is an honor for me to be the one who is giving it to them at that moment," said Morris, 26, who speaks English, Spanish, Dutch and some German. He was raised on English and Spanish, learned Dutch during his performing arts studies in The Netherlands and picked up some German during the year he worked in musicals in Germany, Austria and Switzerland.

Morris mostly sings in Spanish and English, and sometimes throws in some Dutch songs.

Crowds worldwide seem to love this sensual, passionate, electric performer, for such songs as Let's Get Loud (Jennifer Lopez) and Despacito (Luis Fonsi), among others. He combines singing and dancing reggaeton and pop songs in Spanish, English and Dutch for a fun, tropical party.

He has had training in different styles, ranging from classical, Jazz, EVTS, rock, and musical repertoire.

"I have sung at a lot of Pride and LGBT-related events, (such as) Amsterdam Pride, Milkshake Festival in Amsterdam, The Hague Pride and several LGBT bars," he said. "In my experience, Pride audiences (are some) of the best audiences. It seems the audience only wants to have a good time and is open to all sorts of acts and genres. The most impacting performance for now has been the one on De Dam during Amsterdam Pride 2019. I got to perform for 15,000 people and they were all singing and dancing along with me. That was such a gratifying and fulfilling memory."

Morris sang to multiple high-energy crowds in Curacao – and when he landed on "Stay With Me" (Sam Smith), he paused to acknowledge and introduce his boyfriend: Jules Maxime, who he has been with for about 18 months. "I'm really happy I get to share these beautiful experiences with him and grateful that he is also proud of our love," he said.

"While singing the Dutch part of my trilingual version of Sam Smith's (song), I saw that my boyfriend was close to the stage filming the performance. I got close to him and kissed him in front of the whole audience. I have done it a couple of times before, but this was the biggest audience yet. If I want to inspire people to be proud of who they are and who they love, no matter what, then I feel I have to (show through) example."

Morris said singing at Curacao Pride, held in late-September, "really filled my heart to see people of the Caribbean and Latin America celebrate themselves."

"Growing up in Venezuela, I know the pressure of living in a machismo culture; it takes a lot of bravery to break out of that," he said. "Also, singing songs in Spanish for Hispanics is so much fun as they actually understand what I'm singing. Not that that's necessary, but it's fun to see people singing the lyrics with me.

"I expected the (Curacao) people to be very keen for partying, (but) I didn't expect there (would) be that many people celebrating Pride so openly."

Morris said his highlight from Curacao Pride was watching two young girls and a young boy came to dance on stage with him and his crew during the last song of the set, Danza Kuduro (Don Omar). "It's so lovely when the audience is so into it that they want to participate," he said.

He added that singing Born This Way (Lady Gaga) at the opening night party "was a moment I will never forget. (It is) an anthem which is so important for the LGBTQ+ community, (so singing that song) on such a gorgeous island and seeing people sing with their whole heart was a memory I will cherish forever."

Morris started dancing at age 17 at a dance school in Caracas, Venezuela. "I took as many classes as I could because I wanted to catch up with all the students (who) had been doing it for a much longer time," he said. "After graduating from high school, I studied performing arts at ArtEZ Institute of the Arts and graduated at Lucia Marthas Institute for Performing Arts. I received training in various dancing styles, including commercial, Latin and ballroom, jazz, tap, modern, ballet and musical repertoire."

Morris has visited the U.S. only a few times – in Florida and New York, never to Chicago, yet.

"Everyone I've met from Chicago is friendly," he said. "I don't know much about Chicago besides The Bean and that it has extremely cold winters ... but I definitely want to get to know more about (the city).

All-time Favorite Musician or Musical Act: "I don't have one ... I get inspiration from many different artists and their music. Lady Gaga inspires me as a singer, musician, songwriter, actor and fashion icon. I also am inspired by artists from different genres, (such as) Sara Bareilles, Michael Bublé, Sam Smith, Reik, Jesse & Joy, Marc Anthony (and) Maluma."

Favorite Musical: Dear Evan Hansen – "If I ever play in musicals again, this one would surely be a dream come true."

First Concert Attended: "I'm not quite sure, to be honest, but the first one to have really impacted me was when I went to see Hilary Duff in Caracas. She was totally my guilty pleasure as a teenager; I was secretly so happy to be see her live back then. I remember crying as I sang and couldn't believe she had visited (Venezuela). I had a poster of her in my room and remember being so embarrassed by it back then ... no one has time for being embarrassed anymore."

Most Recent Concert Attended In-person: Emotional Oranges. "The most impactful concert I've been to (recently) was Beyoncé. Everything about it made me feel 'This is the level I want to reach,' (including) the vocals, the choreography, the visuals, the empowering messages. Beyoncé is her own (league), someone to look up to."

The LGBT Community: "Ever since I got more exposure on Instagram, I have been approached by people who ask for advice on how to deal with being in The Closet and about my coming-out. Some (people) even have shared the moment they came out ... this is so inspiring. I missed having someone I could share my queer-related thoughts and feelings (with) during my youth, (so) if I can help people in the process of finding themselves, well, that (is) really healing."

Finally: "My goals have changed throughout my lifetime, but my dream has remained untouched: to sing for as many people as I can throughout the world, for as long as I can. One of these new goals that has appeared this last year is that I want to show, through example, that you can be a proud, gay Latino. I have the feeling that Latin music doesn't have many LGBTQ+ representatives, (so) it would be an honor to inspire more and more South American and Caribbean people, (to show) that loving whoever you want to is OK, that it is normal and something to be proud of."