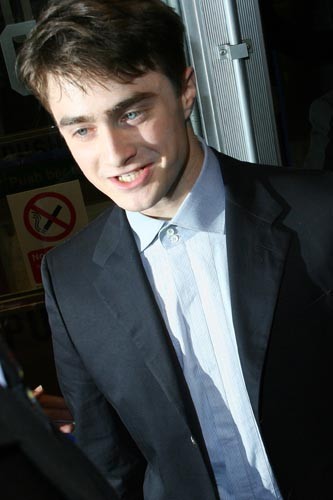 The Trevor Project was founded by the creators of the 1994 Academy Award-winning short film "Trevor," about a gay 13-year-old boy who tries to commit suicide.

"If you're feeling helpless or hopeless, there's always a safe place to turn," Radcliffe says in the video."You can talk to someone 24 hours a day. Be proud of who you are."

The phone number for The Trevor Project is 866-4U-TREVOR. The phones are staffed 24/7. Young people can also email questions anonymously through thetrevorproject.org

In an interview with MTV about the project, Radcliffe talked about the persistent rumors that he is gay.

"My favorite thing I saw was a guy on the Internet that said, 'Of course he's gay. He's got a gay face,' which I thought was kind of an odd thing to say anyway," Radcliffe told MTV. "A 'gay face'? That's a very worrying thing, like they have sat at home and have got pictures of me next to other famous, gay [people] — Elton John, I don't know — just comparing across the years. I'm not sure. It's very, very odd.

Daniel Radcliffe has been involved with The Trevor Project since August 2009, when he joined the Circle of Hope, a community of major donors which plays an essential role in the financial leadership that makes the organization's lifesaving work possible, with a significant donation. He has since continued his involvement, taking a tour of The Trevor Project's East Coast Call Center in New York City this February during which he met with staff members and volunteer helpline counselors and also filmed the PSA.

"I believe that The Trevor Project has a universal mission of acceptance that is so profound," said Radcliffe. "If this brief PSA makes even one lost and alone young person aware of The Trevor Helpline and the lifesaving support it offers, then it will have been an endeavor well worth making."