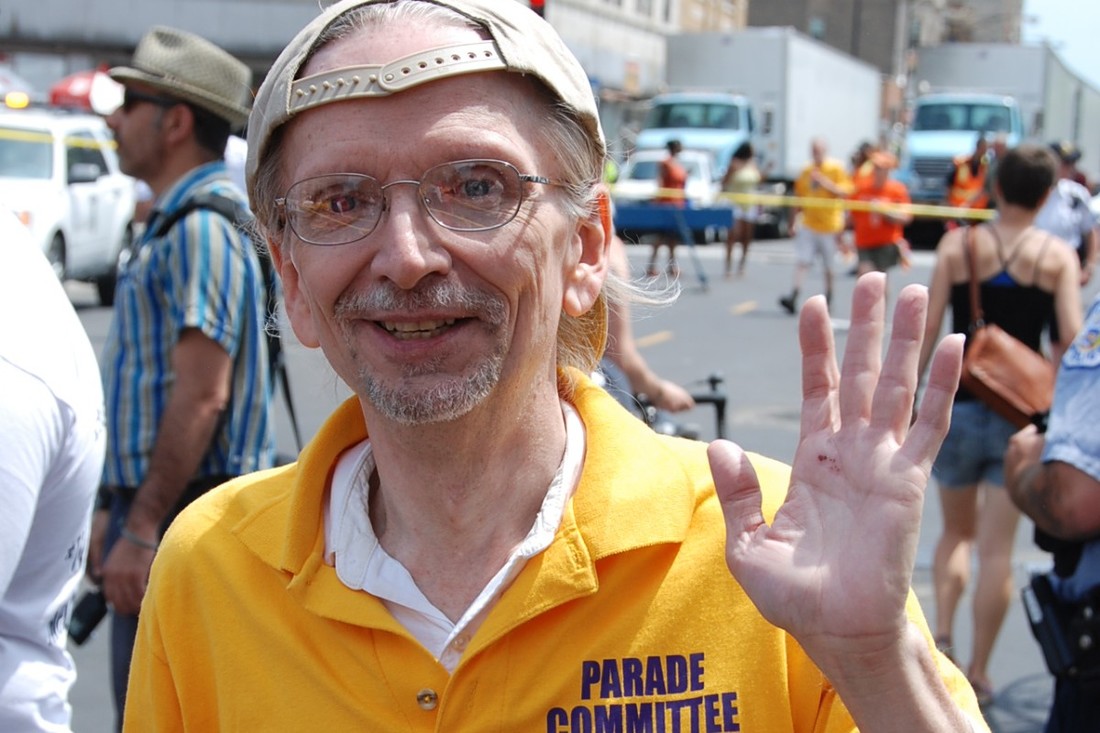 'For decades Richard was a fixture on the front lines of the struggle for LGBT+ rights,' - State Rep. Greg Harris

Chicago, IL - Richard William Pfeiffer, coordinator of the annual Chicago Pride Parade since 1974 and a member of Chicago's Gay and Lesbian Hall of Fame, died Sunday, October 6. He was 70.

Tim Frye, Pfeiffer's husband of 48 years, shared the news with GoPride.com. Pfeiffer battled cancer for the past two years, according to Frye. The funeral will be held at Drake & Son Funeral Home in West Edgewater. Time and date to be announced.

"One of our earliest and longest-serving activists, Rich Pfeiffer made history as he gave our community decades of committed, effective service," said Art Johnston, Sidetrack co-owner and co-founder of Equality Illinois. "Under Rich's year-round consistent leadership Chicago's Gay Pride Parade grew from a few hundred participants and observers to thousands of marchers and over a million viewers, reflecting the amazing growth of our communities."

Pfeiffer watched Chicago's first-ever parade in 1970, was a volunteer marshal at the second, third and fourth parades, and he volunteered to be the coordinator at the fifth parade in 1974. He held the title through this year's 50th annual Chicago Pride Parade.

"It is a tribute to Rich that our parade has thrived with very little of the controversies which have marked so many other parades across our country," Johnston added.Pfeiffer explained his passion for the parade in a June interview with GoPride.com.

"When I watched that first Pride Parade as a young, depressed, in-the-closet gay man, it inspired me to become active in many gay groups," he said. "To see (the parade) grow over the years is constantly inspiring. In the first year, it was marchers who in many cases did not have a lot to lose, (such as) students (and) teens who had been thrown out of their homes and rejected by families and friends as they) identified publicly as gay. It has grown into an event that includes every segment of the LGBTQ+ communities, as well as our allies.

"Pfeiffer was involved with PRIDEChicago since its inception. Having organized dances, rallies, workshops in addition to facilitating the annual Pride Parade. He first became involved in Chicago's LGBT community in 1970 and eventually became president of three organizations: The Chicago Gay Alliance (which operated the city's first gay community center), Horizons Community Services, and the Gay Activist Coalition of Loop (now Harold Washington College).

He founded the Gay Speaker's Bureau, also a gay couple's networking group, and was a facilitator of a class in Chicago Gay History for Lavender University, a 1970's instructional group.Pfeiffer was a volunteer writer and columnist for the now-defunct Chicago Gay Crusader and Gay Life newspapers. In the 1980s, he received awards for community service in the Metropolitan Business Association and Gay Chicago Magazine.

In 1993, he was inducted into the City of Chicago's Gay and Lesbian Hall of Fame.Pfeiffer was also a member of the mayor's Advisory Council on gay and lesbian issues from 1985 to 1994 under three different mayors.

This story is developing and will be updated as more information becomes available.

State Rep. Greg Harris: "I'm very sad and surprised to learn of Richard Pfeiffer's passing. For decades Richard was a fixture on the front lines of the struggle for LGBT+ rights as an activist, journalist for over 40 years, most notably as the leader of Chicago's Pride Parade. Today millions line the street to celebrate the accomplishments, culture, power and joy of the LGBT+ community. It's important though to remember that when the parade started in the 1970s it was very much an act of resistance against inequality and injustice. Richard's work over the years helped move us very very far, but the real meaning of Richard's work in our current political era is to remember that the struggle is as hard as it ever has been, and bringing the community together in solidarity makes us stronger as we fight back."

State Rep. Sara Feigenholtz: "Richard Pfeiffer was a pillar in our community and his passing is a profound loss for all of us. On the last Sunday of every June, Richard Pfeiffer was in charge of it all. Since some of the first Pride Parades in the 1970's Richard had his hand in growing the parade into an event that attracted millions of people who came to show their support and acceptance of the LGBTQ+ community. How lucky we were to have Richard with us at this year's parade to celebrate the 50th anniversary of Stonewall. My heart goes out to his loved ones at this most difficult time."

Ald. James Cappleman: "Richard Pfeiffer was a pioneer for the LGBTQ+ community. His leadership with orchestrating the Pride Parade was instrumental in the coming out stories for so many of us, including me. We are forever grateful to him."

Mayor Lori Lightfoot: "Amy and I were very saddened to learn about the passing of Richard Pfeiffer. Richard was a tireless gay rights activist, whose boundless energy led him to lead countless advocacy groups over the past decades, from the Chicago Gay Alliance to the Mayor's Advisory Council, the Gay Speakers Bureau, along with many others. But Richard's greatest legacy lies in Chicago's own iconic Pride Parade, which for nearly 50 years he worked so hard to organize, guiding it to become the overwhelming celebration of love and acceptance that it is today. Richard was a living example of the power of speaking out and fighting for what you know is right. Our thoughts are with his beloved partner Tim, as well as the countless friends, family, and fellow activists Richard worked, laughed and celebrated with over the course of his incredible life."

Ald. Tom Tunney: "Chicago and our LGBT community lost a champion. Rich Pfeiffer dedicated his life to LGBT activism and service. The decades he gave organizing the Chicago Pride Parade helped make it one of the nation's most popular celebrations of diversity and acceptance. We owe a lot to Rich and will forever honor the legacy he leaves behind. My thoughts are with his husband Tim Frye and his family."

Michael Herman, CEO Chicago House & Social Services Agency: "Richard was an advocate for LGBTQ people. Through his hard work and focused efforts, he raised the visibility of our communities here in Chicago and was a catalyst for change. He taught us to celebrate our communities in all its diversity."