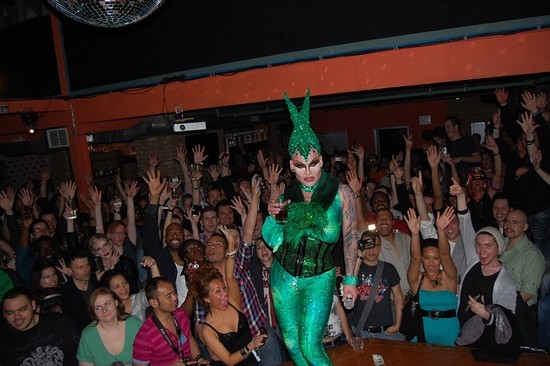 Jorge Flores, known as Nina Flowers, was born in Puerto Rico and now lives in Denver, Colorado with his partner Antonio. Nina got her start while attending beauty school in Puerto Rico and has been performing for 15 years. She is known professionally as a makeup artist, entertainer, DJ and producer.

Drawing inspiration from European Rock Artist, Nina Hagen, the 35-year-old entertainer is quite distinctive with a muscular physique, tattoos and edgy costumes.

"I was heavily influenced by one of my favorites, Nina Hagen. Her character and her drama when performing drew me in," Flowers told ChicagoPride.com last December. "I also found Boy George, the Eurhythmics, and Pete Burns, to name a few very inspirational figures that added to my drag character."

In December 2009, Flowers in collaboration with DJ Ranny released her first dance single "Loca", which is available for purchase through iTunes and Masterbeat. The single reached its highest spot (#15) on the Billboard Hot Dance Club Play the week of January 30.

Flowers performed and promoted her hit single "Loca" during two live shows. After the last performance she signed autographs and meet fans at Spin Nightclub. Later, she DJ'd the Inferno: Bound after party at Steamworks.

Photos for ChicagoPride.com by Anthony Meade