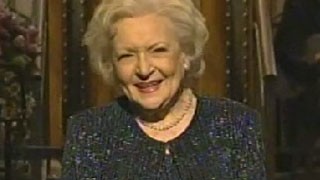 "I can't believe I am hosting ‘Saturday Night Live.' Many of you know that I'm 88-and-a-half years old, so, well, it's great to be here for a number of reasons," White said as she opened the show.

"I have so many people to thank for being here, but I really have to thank Facebook. When I first heard about the campaign to get me to host ‘Saturday Night Live,' I didn't know what Facebook was. And now that I do know what it is, I have to say–it sounds like a huge waste of time." (See clip below)

The much-anticipated episode was billed as a Mother's Day special and featured a number of SNL alums including Tina Fey, Amy Poehler, Ana Gasteyer, Rachel Dratch and Molly Shannon.

Shannon and Gasteyer reprised their NPR "Delicious Dish" sketch with White playing Florence Dusty, a visiting baker who stopped by with delicious muffins. (See clip below)

In another sketch set in 1904 with a family of prissy girls, White called Poehler's tomboy character a lesbian when she doesn't want to dress girly. "She's a lesbian" says White - over and over again - as she continues her needlepoint. (See clip below)

Other than the SNL alums singing the Golden Girls theme song "Thank You For Being A Friend," many have expressed disappointment in the lack of Golden Girls material.

Though White's career spans several decades including her role on the Mary Tyler Moore show, it was her signature role on the Golden Girls that most gay men recall. White portrayed Rose Nylund for 8 years.

Other than a review in USA Today calling the show "less than golden," a majority of reviews following the show have been very positive and judging from the crowd applause the audience agreed. At the end of the show the cheering was so loud you couldn't hear White's first few words.

"You've been so dear to a very scared and happy host," White in closing her first SNL appearance.

Sassy, outrageous and hilarious... at 88 most would agree Betty White is still hot.