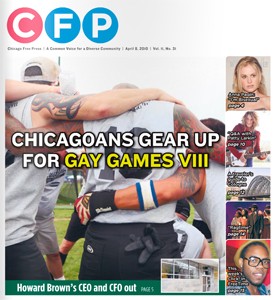 cfp is not expected to return

Chicago, IL - Chicago's LGBT community again questioned the future of the Chicago Free Press, when the paper's April 29th issue was not published last week. Today ChicagoPride.com has learned the gay newsweekly will not return.

Due to health problems, publisher David Costanzo is no longer funding the operation of Chicago Free Press and subsequently the paper will no longer publish, CFP managing editor Kerrie Kennedy confirmed to ChicagoPride.com.

The Chicago Free Press was created in 1999 when staff from the original Windy City Times, which was published by Jeffery McCourt, staged a walk-out to start a new publication. McCourt subsequently sold Windy City Times' name and archives to rival Outlines publisher Tracy Baim.

"While this is unfortunate, I'd like to focus on the wonderful history of CFP," said Kennedy.

Chicago Free Press created and launched "Out at the Ballgame," the Midwest's largest "out" event in association with a professional major league sports team (the Chicago Cubs).

In a statement released today, Kennedy said "... it was CFP's staff of talented and award-winning writers who gave people a reason to pick up the paper every week. Many of them—Paul Varnell, Jennifer Vanasco, Larry Bommer and Web Behrens—have been writing for the paper since its inception."

Questions concerning the stability and future of the Chicago Free Press were abundant following the resignations of editor-in-chief, Matt Simonette, and staff writer Amy Wooten in December 2009 after slow payments to employees.

At that time Bill Feld and Jeff McBride, co-general managers with CFP, denied a mass exodus or financial instability and told ChicagoPride.com the paper would continue to publish as scheduled.

Earlier this year both Feld and McBride left the paper.

As some believe CFP was inevitably the victim of a downturn in print media, Free Press sales manager Gary Gangi disputes that claim.

"The economy has been hard on the print publishing industry but CFP was a substantial product for Chicago and this was reflected in large and longtime national advertisers who felt it was unparalleled as a news and entertainment source for the Midwest," said Gangi. "Unfortunately, the publisher had lost touch with what his business stood for and took negligence with his management and his staff."

Insiders tell ChicagoPride.com that the CFP staff has again gone unpaid - this time since March 31. Kennedy tells the Chicago Tribune that the news staff has not been able to reach Costanzo since April 15.

"It has been my good fortune to have known and worked with many of these writers for more than 15 years," said Kennedy. "The fact that any of us chose to stay during these past few bumpy years is testament not only to the respect we have for each other, but to the dedication we have to serving Chicago's GLBT community."

"It's a shame that such an important publication for the community is lost to the ages," Roscoe's Tavern owner Jim Ludwig told ChicagoPride.com.

With today's developments, the Windy City Times remains the city's only LGBT newspaper.

"This is not a day to celebrate," said WCT's publisher Tracy Baim. "All media, gay and mainstream, are facing new and difficult paths to survival. So it is never a good thing when a media outlet closes."

The Windy City Times is set to celebrate its 25th anniversary this September.

"I am deeply saddened at the closing of Chicago Free Press, Art Johnston, co-owner of Sidetrack and a long-time LGBT activist, told ChicagoPride.com. "Especially in its early years, the Chicago Free Press was a publication of the highest quality with a deep commitment to both covering the news of our developing community and to taking fierce and often controversial editorial positions against the enemies of progress. In our ongoing struggles for full equality, the voice of the Free Press will be sorely missed."