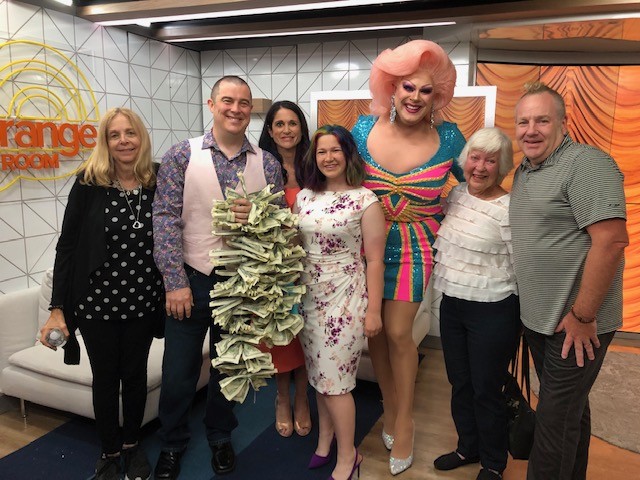 Molly Pinta delivered her message of equality and acceptance for the LGBTQ community on Wednesday, June 12 to a national audience – and was surprised with a financial grant from popular drag superstar Nina West.

Pinta, 13, who just completed seventh-grade at Twin Groves Middle School in Buffalo Grove and was the spearhead for that city's inaugural Pride Parade on June 2, was a special guest on NBC's Today in New York City, along with her parents, Carolyn and Bob.

Related: Buffalo Grove Pride Parade a success, will return in 2020

They were interviewed by hosts Jenna Bush Hager and Savannah Guthrie – and West came on to deliver a $5,000 grant from Jeni's Splendid Ice Creams.

"The Today show was not everything we thought it would be – it was way more," said Carolyn Pinta. "Our entire family was shocked that Nina West had been flown in to visit with us and that Today helped to secure a $5,000 grant."

"This was definitely the biggest thing we've done so far," Molly said.  "Everyone was so wonderful and happy to be there. I was so honored to be able to meet such beautiful, amazing people. We are so thankful for the generous donation from Jeni's Splendid Ice Creams.

"We hope that, being given the chance to share our project on a national stage, will hit somebody in the wide audience with the love and support they need at this very minute, whether it be a parent struggling to understand their child who has just come out, or a person who feels ashamed of being part of the LGBTQ community."

Next up for Molly, she will be the Youth Grand Marshal for the 50th annual Chicago Pride Parade on Sunday, June 30, starting at 12 noon.

"A lot of my LGBTQ friends don't have supportive parents at home, and have told me that being at the parade and seeing these events has made them feel loved," Molly said. "This is the exact purpose of (the Pinta Pride Project)."

Bob Pinta added, "If you have a child who you believe may be gay, instead of asking, outwardly show your own support for the LGBTQ community. Share articles and talk about current politics. Make sure they know you are accepting, so that when they are ready, they won't be scared to come out."

Still on the wish-list for this teenage activist: an appearance on Ellen.