In receiving GLAAD honor, Madonna says every human has a duty to advocate 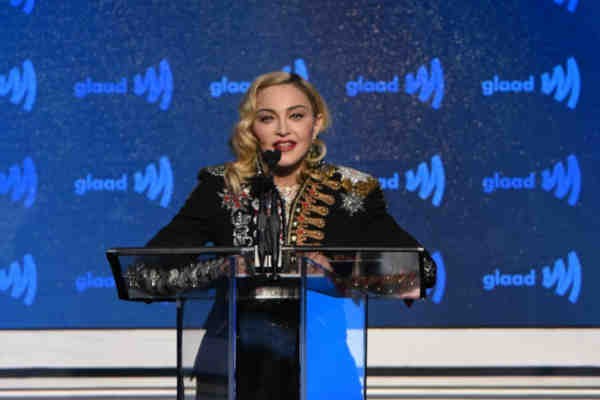 GLAAD on Saturday honored Madonna with its Advocate for Change award at the 30th annual GLAAD Media Awards in New York City.

"No single ally has been a better friend or had a bigger impact on acceptance for the LGBTQ community than Madonna," Cooper said.

"Madonna has always encouraged every one of us who feels alone to find our tribe," O'Donnell said. "She wants everyone to know, 'We love you, we're here for you, and together we all rise.'"

In accepting her award, Madonna delivered an emotional speech.

"Madonna always has and always will be the LGBTQ community's greatest ally and it is only fitting to honor and celebrate our biggest advocate at GLAAD's biggest event ever," she said in a statement. "From the HIV crisis to international LGBTQ issues, she fearlessly pushes for a world where LGBTQ people are accepted. Her music and art have been life-saving outlets for LGBTQ people over the years and her affirming words and actions have changed countless hearts and minds."

Madonna, 60, is the second person and the first woman to receive GLAAD's Advocate for Change award. Former President Bill Clinton received the honor in 2013.

(Related: Bill Clinton at gay awards: You will win the constitutional right to marry.)