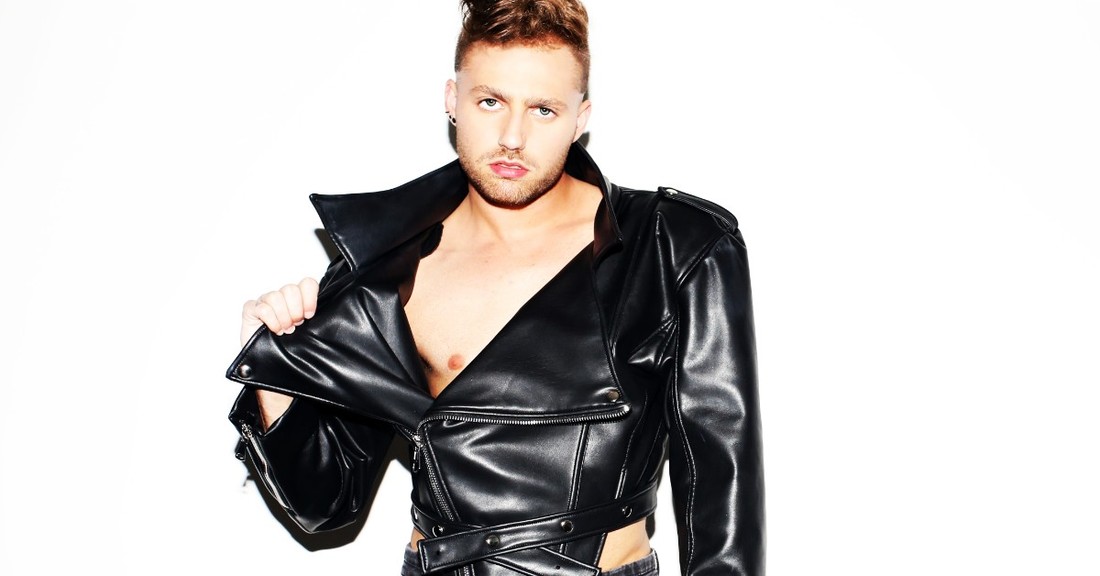 photo credit // edward aninaru
Best known for his role on the final season of Glee, Rilan takes a satirical look at Hollywood in his new song, "Love or Drugs," which came out March 22 and with the corresponding video released 10 days later.

"(The song) is about the reason why we go out: to get fucked or to get fucked up," said Rilan, 24, a Los Angeles resident. "We think a person or a substance will make us better, but all we're doing is treating a symptom of loneliness, not the root of the problem. There are layers in this bubbly, industrial pop song. It's fun, energetic and sweetly sour like a poison apple."

Rilan acknowledges that he now is "in a serious, long-term relationship with my music."

The video for "Love or Drugs" is the party he's never been invited to, he said. "It's what the cool kids do behind closed doors. It's sex, drugs and rock 'n roll without the soul. It's irreverent, outrageous and over the top, and that's exactly who I am as an artist. I make fun of the cool kids because, in reality, there's nothing cool about them."

The video was shot on a rooftop in downtown Los Angeles, filming from 6 p.m. to 6 a.m., with the temperature shockingly hovering around 40 degrees. "It was intense, and I loved every minute of it," he said.

"Pop music is commentary. People will try to convince you otherwise, but they're wrong. Pop is a statement; it always has been. This video is my message to Hollywood and the rest of the world. I'm here to shake things up. The time of the cool kids is over. I'm weird; I'm different; and I'm proud of it, and I'm taking over.

"Besides taking over the world, 'Love or Drugs' is an introduction to the ridiculousness you'll see from me as an artist. It's also a message to every other weird kid out there who's never been cool and never will be. It's so over-rated."

Rilan grew up in New Orleans and moved to Los Angeles in 2014. Within a year, he was cast as a Warbler on Glee.

"I dreamed of coming to Hollywood when I was growing up," he said. "I thought it was the land of the creatives, the misfits, and the artists. But it's not. It's the land of bullshit. It's all about fads and trends, followers and numbers. But that's not confined to Hollywood. It's everywhere. It's depressing when I think about it, but my way of coping is by changing the world I live in, one song at a time, until my fantasy becomes reality. I think a lot of outsiders like myself can relate to that feeling.

"Drugs do nothing for me. I don't do drugs. All they've done is change the closest people around me into strangers. But that's what I've experienced. When people are low, they reach for a high. We all do in one way or another. But the most dangerous high is love or drugs. Both change you if you're not careful. I've spent my whole life trying to be changed by people telling me I should do this or that to fit in and make others comfortable. That's not my job. It's their job to change their perspective and see individuality as the power that it is in a world where everyone tries to be the same."

Rilan said he has a new single and an EP full of "antisocial jams" forthcoming.

But now the focus is, Love or Drugs.

"I want 'Love or Drugs' played on every single screen in the universe, from here to Jupiter and back again. I'm recruiting all of the weird kids from wherever they're from. Earth is just not big enough," he said.

Rilan acknowledged that "Love or Drugs" will ruffle some feathers – and that's what he hopes. "No one ever did anything worthwhile that didn't ruffle feathers. People should talk. That's how revolutions start," he said.

"I make pop music for unpopular people like myself. It's fun, danceable and catchy, but it's different, honest and real as hell. I write songs that you can dance to when you're happy and cry along with me when you're not because we all need a good cry on the dance floor from time to time."

So what about Glee?

"I grew up watching Glee; I was such a fan," he said. "It was the first the time I felt like I actually related to high school characters on TV. They were theatre kids, outcasts, and loners, but they were all artists. It was inspiring to see that on national television to such great success. It was a dream to be on the show, but I never thought it would happen. I actually auditioned five times. After the fourth time and second callback I had already written it off. I didn't think it was in the cards for me. Guess the fifth time was the charm.

"I was in an acappella group in high school. We sang a bit of everything. Sometimes we'd do jazz standards. Other times Top 40. I think what made our performances special was when our members would arrange originals for the group. One year our president arranged a mashup of MGMT's 'Electric Feel' and 'Kids.' When I took over senior year, I arranged Robyn's 'Call Your Girlfriend' and Sara Bareilles' 'King of Anything.' I was always pushing my pop agenda. I took it so seriously, and I thank my choir teacher for pushing me to be a better musician. I really do use the knowledge he passed on to me whenever I write and record. It was the most positive aspect of high school for me by far."

"I take my music very seriously. It's a craft, and it must be honed. You never stop learning and pushing yourself to do better if you want to succeed," he said. "That said, I don't have a stick up my ass like the Dalton Warblers. I'm about the furthest thing from a prep as you can get. I went to school with those kids my entire life. In fact, my school was similar to Dalton: small, private, and unnecessarily stuffy. I was hardly the typical student. The Warblers are super talented, and I loved being a part of them, but if I were still with them I would shake things up a bit, starting with a lot less hair gel."