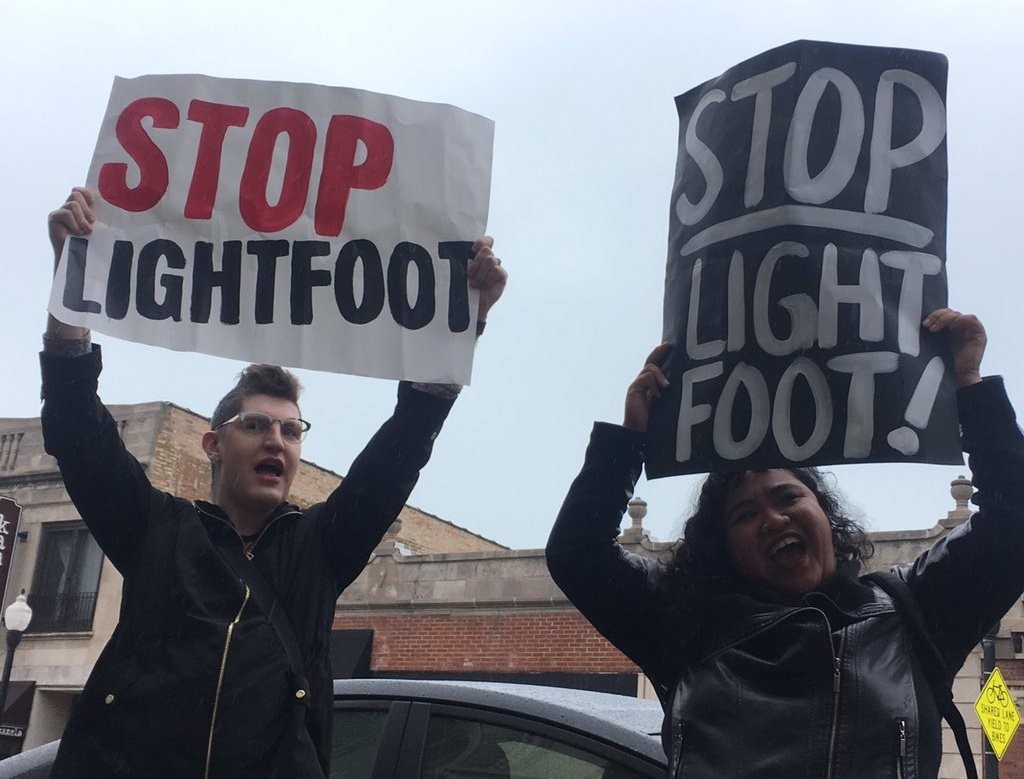 Protestors: ‘We have no affiliation with Toni Preckwinkle’

Lightfoot, Chicago's first openly LGBTQ candidate for mayor, took the stage following a drag performance Sunday afternoon to deliver a message to the largely LGBTQ audience in attendance. "The forces of the status quo are powerful. They're pulling out every trick in the book: blow the dog whistles, sound the alarm," she said. "We have to fight back against hate with love and optimism and hope. We can't rest."

As she was taking pictures with a drag queen following her remarks, a small group of protestors began chanting, "Lori Lightfoot, you can't hide! These queers can see your shady side!" Their chants drew boos from the crowd and the protesters were eventually removed from the restaurant but continued to protest outside the venue.

"We are terrified if she becomes mayor of this city. It's horrible for black and brown communities; it's horrible for communities in general," protester Kristina Tendilla told GoPride. "She has not been supportive of affordable housing, she has covered up police murders in the city. A lot of us were there when Rekia Boyd's family was at those [Chicago Police Board] hearings, and she was completely disrespectful to the families."

The Lightfoot campaign has put forward plans both for affordable housing and reforming the police department. While she led the Chicago Police Board, the percentage of police board hearings that resulted in an officer being fired and the number of cases where an officer resigned before facing a likely termination by the board nearly doubled.

Tendilla's criticisms dovetailed with those leveled by Toni Preckwinkle's campaign and allies Chance the Rapper and Congressman Bobby Rush. On Saturday, Rush claimed more black people would be killed at the hands of the police if Lightfoot was elected.

"We have no affiliation with Toni Preckwinkle at all," claimed fellow protestor Stephanie Skora. "We're just queer and trans people who are really, really concerned about the way Lori Lightfoot is using her lesbian identity to try to get votes from our community when she's supported by every single person in this city who wants to see us gone."

Both protestors were with the #StopLightfoot campaign, which describes itself as "a group of young Black, Brown, Native, white queer, Trans and gender-nonconforming organizers and people who love Chicago, and have worked for years on issues of police violence, immigrant justice, LGBTQ liberation and more."

According to Lightfoot's LGBT outreach coordinator, Coleman Balogh, the protests against Lightfoot are a recent phenomenon, with the first one starting Saturday. "The issues that I have found that they're protesting don't necessarily coincide with things that she's directly responsible for or has control over," he said. "I do believe their energy is misplaced, and I think that there's an appropriate way to handle it, and that way does not involve screaming and lunging at people onstage."

Speaking to GoPride, Lightfoot acknowledged the protesters and pointed to her support within the LGBTQ community. "It comes with being a public figure. I think the reaction of people here, even in the face of a contrary view is pretty overwhelming," Lightfoot said. "I walked in to applause and I'm leaving with applause because I think people recognize that we desperately need change. We need a mayor who speaks for and stands for equity and inclusion."

While much of the LGBTQ establishment - including Equality Illinois PAC, the political action committee for Illinois' largest LGBTQ civil rights group - has backed Lightfoot, the Preckwinkle campaign told GoPride in an email statement it had also reached out to the LGBTQ community, holding multiple roundtables among LGBTQ leaders. It also pointed to endorsements from LGBTQ leaders including longtime community activist Rick Garcia, Alderman Carlos Rosa, immigration rights activist Tania Unzueta, and executive director of the Personal PAC Terry Cosgrove, among others.

Early voting for the runoff election started on March 15 and will continue until the April 2 election. For more information, visit chicagoelections.com