Chicago's marginalized communities given a platform at Sanders rally 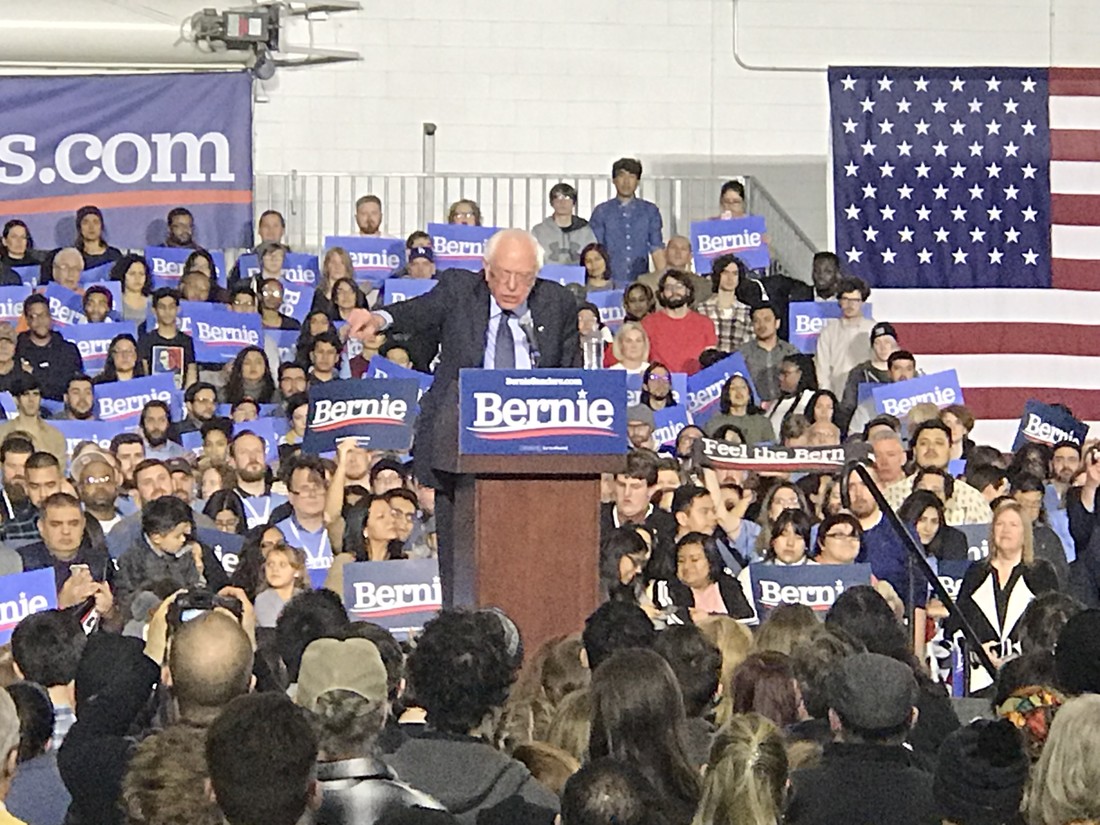 Sanders may have held top billing, but it was the stories of Chicagoans who stole the show

Chicago, IL - Presidential hopeful Bernie Sanders held a rally in Chicago Sunday night, kicking off the Midwest portion of his announcement tour. While the independent Vermont Senator, who is seeking the Democratic nomination, stuck largely to his national message, the lineup before Sanders took the stage was full of people of color from marginalized communities across Chicago.

The rally began with gospel music from The Tommies Reunion, a Chicago-based black choir that was vocal in their support for Sanders. It was followed by a series of speakers, including activists from across the south and west sides of the city who touched on issues ranging from gentrification to gun violence and police brutality.

Destiny Harris, a young, queer black poet, spoke out against injustice in the education system, "From a very young age, I became aware of the way politics affects the way I exist in the world," she recalled. "At the age of 12 in 2013, I saw Francis Scott Key Elementary, my severely underfunded, predominantly black elementary school located on the West side of Chicago get shut down at the end of my sixth-grade year. I saw the school my friends attended a few blocks down get closed too." Those closings led her to ask who was responsible for the closing of over 50 schools, most of which were in predominantly black and latinx communities.

Harris spoke also spoke out in strong opposition to the proposed Cop Academy in Chicago. "They claim [the cop academy] will bring more development to the west side," she said. "I didn't know more development looked like more jails policing and mass incarceration."

Ashley Galvan Ramos, the youth representative on the Logan Square Neighborhood Association then took the stage. "I lived in Logan Square all my life, and I thought I was going to stay for the rest of my life... A year ago, my family and I found out our landlord was selling the building where we were living," she began her story. " We tried to see if we could get at least a month to pack and find a place. The new [building] owner agreed, but if we were to stay longer than that, we would have to pay $1500 for the rent where we would pay $800 for the exact same apartment."

With nowhere to go, Ramos' family was homeless for a few weeks until they were taken in by other family members. "My mom still has to travel to Logan Square for work, and I gave up on school. During the time I was supposed to be in school, I was walking around the neighborhood looking for an apartment," she said. "At the time my life looked really dark and hopeless, but without my connections to LSNA, my parents and I would not be homeowners today. Even though we have a new home, the feeling of being displaced lingers."

Emotional as the accounts from the Chicago activists were, it was Sanders' campaign co-chair Nina Turner who gave the most impassioned speech. Turner, who is black, was one of the Vermont Senator's early supporters.

Turner also spoke on Sanders willingness to take on large corporate interests, including standing up for workers at Mariott, Disney, Verizon, and Amazon.

Sanders traces his early activism to his time as a student at the University of Chicago during the 1960s. "As someone who came from a working-class family Chicago provided me, for the first time in my life, the opportunity to put two and two together in understanding how the real world worked," said Sanders. "To understand what power was about in this country and who the people were who had that power."

Sanders had fought against racial discrimination as a member of Congress on Racial Equality, or CORE. He was arrested protesting the conditions children of color had to endure in the rat-infested trailers without heat or air conditioning that served as classrooms.

"One day, many of us went to the spot where they planned to put the trailers. We were corralled by a police line and told not to cross that line," Sanders recalled. "Well, some of us did. And, of course, we were arrested and thrown into paddy wagons. We spent that night in jail until we were bailed out the next morning by the NAACP."

Sanders touched on several issues highly relevant to Chicago, including a pledge to stop urban gentrification, and end the epidemic of gun violence in Chicago and across the country.

The 77-year old self-described democratic socialist from Vermont, a state that is over 94 percent white, struggled to connect with black voters during his 2016 campaign. He was crushed in the southern states by then-rival Hillary Clinton in large part due to lack of support within the black community.

Still, Sanders is able to draw upon an impassioned base of supporters. "I was really excited by the energy that I saw. I've never seen quite that many people in one space," Drake Newnum, a first time Sanders volunteer from Avondale told GoPride. "What I'm excited for the Democrats to lean into at this point is that they really are the party that represents how America looks in 2019."

Chicago is an unusual stop for candidates this early in the campaign. Illinois holds its primary after March 3, 2020 - the so-called Super Tuesday where 10 states hold their nominating elections. The deep-blue state is unlikely to be competitive during the general election. Candidates appearing in the Windy City early in the nominating process have typically kept their schedule limited to fundraisers.

Sanders began his announcement tour in his native Brooklyn on Saturday, just 24 hours prior to his Chicago speech. He faces competition from a deep bench of over a dozen candidates for the nomination, including progressives who have adopted many of Sander's policies.