It's up, up and away for the DC League of Super-Pets 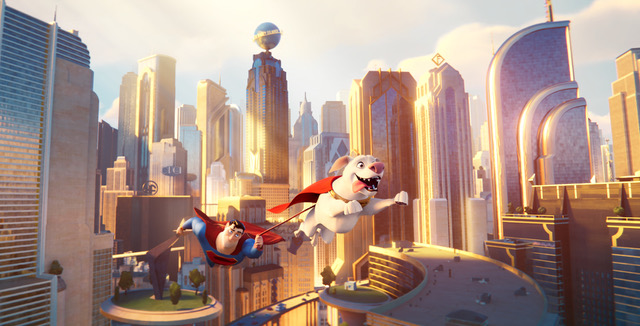 DC League of Super-Pets begins fighting crime in theaters on July 29 with a new adventure made for both adults and kids. The Legion of Super-Pets started in 1962 after Krypto the Super-Dog, resembling a golden retriever became popular in 1955 as Superman's sidekick. I first read about him in the '70s after obtaining my dad's comic books, so I've had a long history with the furry team.

Originally the team was composed of Streaky, Supergirl's cat, Beppo, a monkey scientifically tested on by Superman's dad and Comet, a horse with magical shapeshifting powers.

This storyline has been drastically changed as the Legion of Super-heroes have not been given their due in the DC Universe as of yet and people are more familiar with the Justice League franchise now. In this cartoon version, it is also not necessary to adhere to what has been released so far in live-action films, which leaves room for a lot of growth and fun.

DC League of Super-Pets tells the tale of Krypto traveling to earth with baby Superman and eventually becoming this man's best friend. When the Justice League is kidnapped, this hot dog must form a team of animals with powers gained from orange kryptonite to rescue the heroes. Red kryptonite gave people unique abilities in the comics but let's not split hairs here...

The voices cast in the cartoon are mighty with Dwayne Johnson leading the pack as Krypto. Standouts are Keanu Reeves as a damaged Batman and Natasha Lyonne as the elderly turtle Merton. LGBTQ+ representation includes Kate McKinnon, presenting a wide vocal range portraying Lulu, and John Early as The Flash. There are also new possibly queer fire and ice guinea pig team members simply known as Keith and Mark later on in the film.

There are bleeped-out curse words with hilarious results and some humor that may fly over the kiddie's heads. The running time is a little long for a cartoon to keep some children's attention, but adults will enjoy the full-fledged cinematic experience of one hour and forty-five minutes.

The script is well written and the pace is kept right on target as the celebrity voices elevate the material. This project has humor which the DC live-action franchise is sorely lacking these days. DC Comics had lightweight storylines and left Marvel Comics alone to depict heavy-weight topics such as death and drama in their publications.

DC copying off the MCU was not a good move in the first place. If the company would keep its eyes on its own paper and have more jokes about invisible planes they could then be propelled in a more original direction. DC League of Super-Pets and many of the Warner Bros. Pictures cartoons nail it in terms of adapting the best parts of this iconic comic history.

Soar into your local theater to see the clever and funny DC League of Super-Pets after July 29.

Be prepared for entertainment with an animalist adventure that should inspire many super sequels in the future!