When looking at the history of theatrical productions, there are definite benchmarks whose success or failures have changed the course of the industry as whole. Inarguably, in our lifetime, few shows will be regarded as having had such an impact on the medium as Lin-Manual Miranda's epic opus Hamilton: An American Musical , which in its short time among us has become as important a piece of work as Porgy & Bess , Oklahoma, West Side Story and Jesus Christ Superstar .After an initial, much lauded run at the Public Theatre, Hamilton's 2015 transfer to Broadway became a worldwide media event, where its ticketing advance has been in the tens of millions. Last night, Chicago received its own sit down production of Hamilton with the original creative team on board to make an almost seamless replica of the Broadway production. The result, stripping away all they hype that surrounds the show, suffice to say Hamilton is a masterpiece of musical theater. 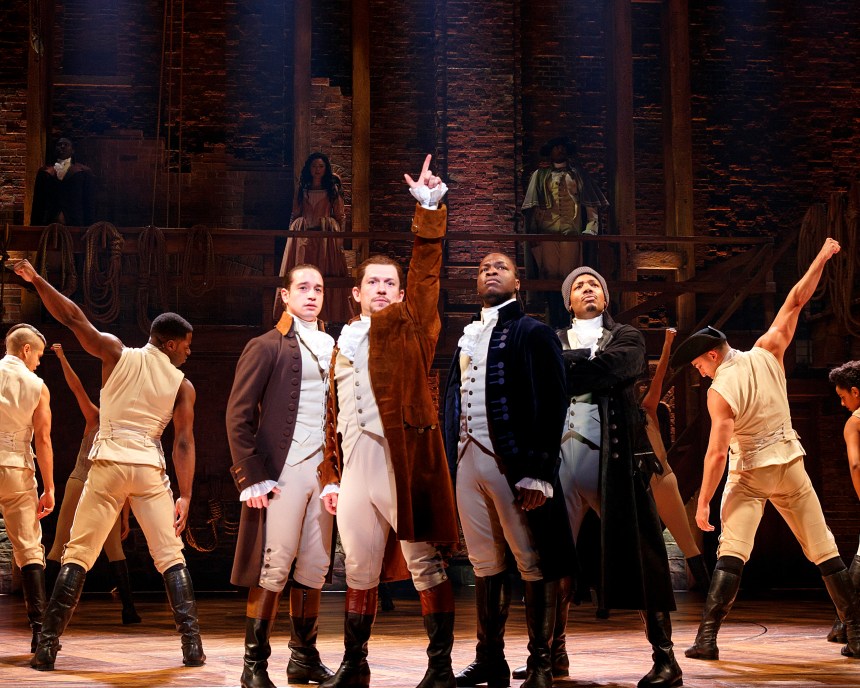 Solidly grounded in Ron Chernow's biography, Hamilton takes us through the life of one of our country's most important founders, as seen through the eyes of his killer, Aaron Burr. Just as Andrew Lloyd Webber and Tim Rice did by using Judas Iscariot tell the story of his friend Jesus, this antagonist as martyr method allows for a more emotionally rich journey to glimpse inside the truths of these characters.

More than any other show of the last decade, it is the totality of Hamilton that makes it a cross-generational hit, marrying composition, book, sets, costumes and choreography in the most seamless of fashions.

Director Alex Lacamoire, who is known being an actors' director, moves mountains with his Chicago cast. Lead by Miguel Cervantes as Hamilton and Joshua Henry as Aaron Burr, this company is as much an integrated unit as their Broadway counterparts, and even though they only have weeks of rehearsal and previews under their belts, the Chicago-centric Hamilton is already a well oiled machine, with near perfection being an operative, if not overused, term of description.

Mr. Cervantes' is a myriad of astonishments in his portrayal of Alexander Hamilton. His youthful looks align perfectly with his character's outward arrogance. As his life experiences unfolds, each segment seems to age his performance incrementally, so that by the time we get to the final dual, his 47 years of life seems that of a man twice that age. Mr. Cervantes' also has an innate onstage chemistry with his castmates, making each relationship all the more real.

Therein lies the other key to the success of Hamilton; the relationships that we as an audience can, well, relate to. It is in that juxtaposition that this show relishes.

Make no mistake, though the founding times of this country were male dominated, Hamilton has a musical, makes it clear that it was the women that shaped his country as much, if not more than the men. His marriage to Eliza Schuyler, and her sister Angelica's influence is the backbone of this play. Eliza's strength, both maternally as and a wife is what truly made many of Alexander's accomplishments (post King George) possible. Ari Afsar's Eliza, though a bit stayed as a performance, is always balanced and doesn't disappoint in her aria "Burn". Karen Olivo proves she is one our greatest Broadway belters and navigates her Angelica through miraculous emotional gravitas.

Chicago's Hamilton does have remarkable standout performances which are every bit as powerful as the Broadway originals. Jonathan Kirkland's (George Washington) lyric tenor pipes shake the theatre seats; Alexander Gemignani's King George is pitch perfect in its affect of campiness; Chris De'Sean Lee gives his Thomas Jefferson a Ben Vereen style vibe, with the ability to float across the stage.

As stated earlier, Hamilton's arch is largely dependant on Aaron Burr, and as played by Joshua Henry, this role is once again reinvented to a brilliant, if not almost heart-wrenching status. Mr. Henry guides as a narrator, lets us into his emotional depravity and finally lets us go to let us write our own story by the end of the show. Every hit that Aaron Burr takes to his pride is then transferred by Henry to the audience so that by the time the dual is realized, we are as much saddened for him as we are in the death of Hamilton.

As a score, Mr. Miranda's composition will in no doubt become a benchmark in the lexicon of musical theatre. Weaving between hip-hip, rock and classic show-tunes, there is little doubt why this cast album has found its way into the playlists of teen to octogenarians.

Just as important is Andy Blankenbuehler's expertly integrated choreography, which forwards the story along just much as the book. Not since the great Bob Fosse has there been a musical where movement has mattered, or has been executed so perfectly.

The integration of David Korin's multi-turntable set is lit to precision by Howell Binkley's allowing for flawless scene changes. While Nevin Steinberg has done the impossible at the Shubert (PrivateBank Theatre) by creating near perfect sound balance.

With all the hype surrounding Hamilton, it is important to not lose sight of the soul of the musical. It is our story. In the political climate we are currently enduring in our country, Hamilton could not have come at a more meaningful time. Seeing the selfless sacrifice these founders made for our benefit is sometimes beyond the scope to comprehend. But it is there, in the form of an integrated musical masterpiece for us to see. Hamilton: An American Musical has the unique ability to make us a better people after viewing their stories and should become mandatory viewing for any politician running for office. After all, you never know who will end up writing your story.

Hamilton: An American Musical , is playing an open ended run at the PrivateBank Theatre. Visit BroadwayInChicago.com or HamiltonOnBroadway.com for tickets.