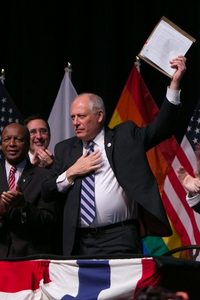 2013 was an incredible journey of sweeping change. Here's a look back at the moments that defined our year.

2013 was an incredible journey of sweeping change. Here's a look back at the moments that defined our year.

On Nov. 20, with the stroke of Gov. Pat Quinn's pen, Illinois becomes the 16th state in the country to allow full marriage equality, which takes effect June 1, 2014.

On June 30, over 1 million people turned out for the annual Chicago Pride Parade lead by Grand Marshal Wade Davis. Among those appearing in the parade were Mayor Rahm Emanuel, Governor Pat Quinn, state Rep. Greg Harris (D-Chicago) and other politicians and advocacy groups, who were focused on equal marriage for Illinois.

On Oct. 22, thousands of marriage rights advocates rally outside the Illinois state Capitol as part of the March on Springfield for Marriage Equality, an event considered to be a pivotal point in the fight for equal marriage.

On July 2, Steve Grand, an aspiring songwriter, released the video for "All-American Boy," a country-rock ballad about unrequited love. When ChicagoPride.com first featured the Chicago-native on July 4 he was a relatively unknown singer/songwriter, but he would quickly become an internet sensation. Grand was named the "first openly gay male country singer" by news outlets worldwide. In 2013, Grand performed at Market Days and the March on Springfield for Marriage Equality.

In April, Developers behind OUT Chicago Urban Resort in Boystown presented their plans to the public for the first time. neighborhood residents were concerned over what they called a "hulking" and "monstrous" project that could lead to traffic congestion. What originally started as a 10-story hotel has been sized down by developers, but residents continue to balk. This story will continue into 2014.

In May, ChicagoPride.com first reported plans by the Northalsted Business Alliance (NHBA) to move Pride Fest to the weekend before the annual Chicago Pride Parade. The street festival had traditionally been a prelude to the parade.

On Nov. 25, a federal court ordered the Cook County Clerk to immediately issue a marriage license to Vernita Gray, 64, who is terminally ill, and her partner Patricia Ewert, 65. The decision was later broadened to include any same-sex couples in Cook County, Illinois who face life-threatening illness.

On Aug. 2, the Chicago-based National Gay & Lesbian Sports Hall of Fame recognized its first class of honorees during a ceremony at Center on Halsted. The Chicago Cubs, Christina Kahrl, Billie Jean King, Greg Louganis and Martina Navratilova were among the inaugural class of inductees. The first of its kind in the United States, the hall of fame was started by Bill Gubrud, who serves as executive director and board chairman.

On Oct. 28, Lambda Legal filed a complaint that alleged a Chicago cab driver unlawfully refused service to a gay couple after they exchanged a kiss. The Sun Taxi driver was accused of trying to force the couple to exit the cab on the shoulder of the busy Kennedy Expressway. The driver was fined $1,540 by Chicago’s cab regulatory agency and fired by the taxi company following the incident in May.