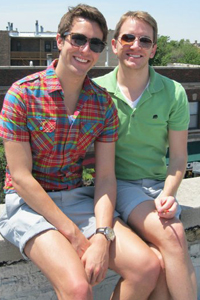 The 44th Annual Chicago Pride Parade is scheduled for Sunday, June 30 at noon stepping off from Broadway and Montrose in Chicago's Uptown neighborhood. Here are some tips, tricks and pearls of wisdom for surviving the weekend and ensuring a fun and happy Pride!

The 44th Annual Chicago Pride Parade is scheduled for Sunday, June 30 at noon stepping off from Broadway and Montrose in Chicago's Uptown neighborhood. Here are some tips, tricks and pearls of wisdom for surviving the weekend and ensuring a fun and happy Pride!

This is Pride, the one year you have an excuse to wear that ultra flashy shirt and shorts shorter than you'd normally wear. I say have fun with what you wear and celebrate the culture that's made our community unique. - Andy Ambrosius, Lakeview Patch (pictured left)

Just be comfortable and wear enough cloths to cover you, keep everyone wondering. - Miss Foozie

Wear light, feel-good clothing that you're also not afraid of getting dirty from amateur-made Jell-o shots or yellow mustard. Trust me on the mustard. - Stephen Leonard, Singer/Songwriter

There are definitely a lot more fashion wrongs than rights during the weekend, but live and let live! - Matthew Harvat, CircuitMom Productions

The best would be if you have a friend with an apartment overlooking the parade, barring that the next best is if you can snag a window seat in one of the bars along the parade route - such as Sidetrack, Roscoe's or Halsted's. - Rick Karlin, ChicagoPride.com

Go north, young man! With the new route it is more relaxing up by Montrose instead of the congested Boystown. Roscoe and Addison cross streets on Halsted are ones to stay away from. - Jerry Nunn, Nunn on the Run

If you're lucky enough to score a rooftop or balcony view, absolutely go for it. The streets are beyond crowded, so picking a decent spot to hang with a group of friends is tough. If you're forced to watch on the streets, get there early and stand your ground. - Andy Ambrosius, Lakeview Patch editor

Try and get there early and sit/stand in front and don't let ANYONE get in your way! We all know how high those drag queen's wigs can get! Knowing a friend with a Parade-view apartment is a plus, but not a must. - Ryan Kolodziej, ChicagoPride.com

Forget about street parking. Just bite the bullet and pay to use a ramp, or if at all possible, use public transportation. - Andy Ambrosius, Lakeview Patch

Surprisingly enough, I have found that the parking garage directly across from The Vic Theater on Sheffield just south of Belmont has the best rates and you can swing in early and actually get out without much traffic anytime on Pride Sunday. But, shhhhhhh...don't tell anyone! Otherwise, CTA, CTA, CTA--it's a parade and a show within itself on Pride weekend. - Matthew Harvat, CircuitMom Productions

Take the CTA and leave the roads and parking spots for those who live in the area and need it. Otherwise, park out west and take the CTA to the parade route. - Stephen Leonard, Singer/Songwriter

My best tip is not to drive at all. Take a taxi or use our wonderful public transit system. If you must drive try parking in the neighborhoods west of Wrigley Field. Just remember where you left the car! - Brian D.

Pull out cash rather than using a credit card the whole weekend. Every bar and restaurant will be busy, so its nice to have cash on hand to speed up the process. - Andy Ambrosius, Lakeview Patch

Always carry some cash with you whether it be for water, drag queens or strippers. Otherwise use your card, but keep conscious of how many rounds of lemon drops you've put on your tab and when it's time for your friends to buy a round. - Stephen Leonard, Singer/Songwriter

Unfortunately, the parade route does attract some people who are out for more than a good time. When you walk the streets, don't bring your wallet. Take the cash you need and some sort of identification and put them in a pocket that no-one can slip their hand into. Don't wear expensive jewelry. Basically, don't take anything with you that you would have a hard time replacing if it gets lost. - Jeff G.

Figure out how much money you want to bring...then double it. - David H.

If you see anyone wearing jorts, compliment them and ask them if they did it themselves. Some of the greatest things come from taking interest in others; especially if they are wearing jorts. - Stephen Leonard, Singer/Songwriter

Give up Grindr for a few days and get out and about. There's a lot of folks to meet! - Bill Pritchard, ChicagoPride.com

Don't be shy! This is the one day a year where gay people can be themselves and not have to worry about what other people think of them... Be yourself, say hello! - Ryan Kolodziej, ChicagoPride.com

If observing the parade from a house party, always bring booze and offer it to the host and close friends. - Stephen Leonard, Singer/Songwriter

Make friends with the guys who live on the parade route so you get invited to good parties. - David H.

If you like to dance, drink, sing, or swagger; there is a place for you in Boystown! - Bill Pritchard, ChicagoPride.com

Restaurants, such as Yoshi's, Las Mananitas and Horizon Cafe are also good options, but you better plan on ordering enough food to take up that booth for a few hours. - Rick Karlin, ChicagoPride.com

Eat early (pre-parade) near where you plan to view so that you don't have to fuss over finding a place to watch. - Gregg Shapiro, ChicagoPride.com

Sunday brunch may be a bit tricky (No pun intended) as the Pride Parade begins at 12:00 p.m. Most popular spots will have a “Pride Package” that day. - Bill Pritchard, ChicagoPride.com

Chicago weather is always unpredictable so bring a small umbrella! - Jerry Nunn, Nunn on the Run

Sunscreen, darlings!!!! Rain or shine, you must slather up and protect yourselves! - Matthew Harvat, CircuitMom Productions

Don't bring any clothes you don't want to sweat in. - David S.

Prepare for it to be hot. Or if your iPhone weather app says there is a good chance that it'll rain, then you should probably prepare for that. - Stephen Leonard, Singer/Songwriter

Just plan ahead and take Monday off from work. There is hardly any time or place to rest if going balls-to-the-wall on Sunday. - Stephen Leonard, Singer/Songwriter

Lay low the week before Pride, so you have the energy to make your much awaited appearances across Boystown. The best way to get the most useful rest is proper nutrition, plenty of water, (not Vodka) and a realistic schedule of start and stop times will keep you on the go and looking fresh for all of the sociality required during this, the gayest of weekends. Sleeeeeeeep! - Matthew Harvat, CircuitMom Productions

If there were ever a reason to call-in-gay to work, Pride weekend is it! Don’t be dumb and try to go into work the next day. Wake up without the alarm and enjoy a nice leisurely day. - Bill Pritchard, ChicagoPride.com

If you have to pee, use a porta potty. If you have to make a stink, find an actual toilet in a house or willing adjacent business. Especially if surrounded by madness all day, taking a silent moment to yourself in a clean, cool bathroom is always refreshing. - Stephen Leonard, Singer/Songwriter

Clean bathrooms are a difficult thing to find during Parade day. Every business closes their facilities to everyone but paying customers. If your hotel is far from the action, take care of the more important business before you hit the streets. - Mike S.

No matter how "bad" you have to go, do not urinate in the streets. This is a fine way to end up in lock up. Besides, it's not polite. Listen to your body. Get in line before you really have to go. By the time your crossing your legs, you might be at the front of the line. - Jim C.

Where to watch 'RuPaul's Drag Race' S15/E3 in LGBTQ Chicago