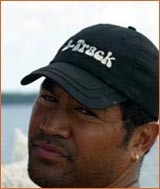 ESERA TUAOLO
Born of Mainaivasa Tavai Tuaolo and Maiuu Mike Tuaolo on July 11, 1968 on the beautiful island of Oahu, Esera was the youngest of eight children. He grew up on a small banana farm on the windward side of the island in the town of Waimanalo. He credits his imposing strength to such tasks as bringing bucket of water up to the house from a nearby reservoir; carrying 50-pound bunches of bananas down the steep hills of the Hawaiian countryside, and manually clearing the 15 acres of banana groves. He credits his Mother and Father for his love of music. As a child, he would entertain family guests by dancing and singing. His musical inspiration came from both the church where he sang in a choir, and also from the radio where he was especially moved by Aretha Franklin, Luther Vandross, Teddy Pendergrass, Patti LaBelle and the Manhattans.

Esera attended school in Oahu up through the first two years of high school. He then went to live with relatives and finished high school in Chino, California. During his senior year, he received an athletic scholarship to Oregon State University for football. While at Oregon, he as a first-team All-PAC 10 selection. As a junior, he on the coveted Morris Trophy, awarded to the PAC 10's top defensive lineman based on votes from the league's starting offensive lineman. In addition, he earned all-conference and honorable mention All-American honors.

In 1990, despite a knee injury, Esera was drafted by the Green Bay Packers in the 2nd round as the 35th pick overall. Ironically, it was through his football career that he first started gaining attention for his outstanding vocal performances. In what is a traditionally humiliating initiation ritual at Green Bay's training camp, all rookies are required to stand and sing a song to their teammates before being allowed to take a place at the table for dinner. Esera's rousing, gospel-tinged version of "Mary Had a Little Lamb" led him to be the first player ever to perform the national anthem at a nationally televised game- just one month into the season.

During his career in the NFL, Esera played in the 1999 Super Bowl XXXIII with the Atlanta Falcons, contributed 17 tackles and a fumble recovery, and proved he was a productive run-stopper and talented defensive lineman. After 10 years in professional football, playing for the Packers, Minnesota Vikings, Jacksonville Jaguars, Atlanta Falcons, and Carolina Panthers, Esera retired to pursue a career in acting and singing.

ChicagoPride.com had the opportunity to get to know Esera a little more:

CP: When did you first realize you were gay?

CP: In October 2002, you made a courageous move by coming out on the HBO program "Real Sports." Why such a public proclamation?

ET: We could have lived our lives [without coming out publically] but the fact of the matter was that I was a high profile person in our community.

We didn't want a gossip columnist to get a hold of our story and bring out in a negative way. By [coming out on] Real Sports we had controll of what we wanted out there; and what was the best for our family.

CP: What scared you most about coming out?

ET: The fear of the unknown. The calm before the storm.

I wasn't sure how society would take it and we felt all alone.

CP: During your nine years in the NFL, were you ever able to share your sexuality with teammates or friends?

ET: I had a tiny circle of friends that knew my secret. But as far as anyone in the NFL, "Hell no!!" It was never an option. I had never felt any support from my teammate, coaches, front office or from the NFL league.

CP: What was it like being a gay man and forced to hide your sexuality in the masculine culture of professional football?

This means that anytime you are in an enviroment that is not safe or supportive it takes away a part of who you are. In any case, not good!

CP: What kind of reaction have you received from former teammates or the NFL since coming out?

ET: Only a handful of teammates have contacted me showing their support. There have also been some saying that they don't know what they would have done if I had come out while I was playing.

As far as the NFL, they finally contacted me a month ago and have asked me to speak to their corporate office on Homophobia and Diversity at the end of this month on the 30th of June.

All I can say is, pray for me!

CP: You're in a committed relationship of over 8 years. Today you and Mitchell are the proud parents of beautiful twins, Matio Mitchell and Michele Mainaivasa.

ET: Yes we are! Also, since we've been out, we have met people in the gay community that have been together ranging from 10 to 55 years and that is such an inspiration to us.

The second half of the interview can be found here.