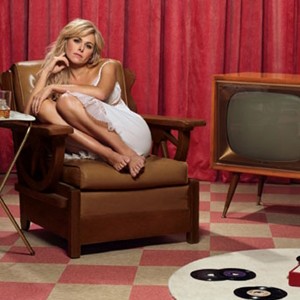 “I wish we could have a gay male country star,” says a typically irreverent Laura Bell Bundy when talking about her kinship with the gay men that helped shape her career as a singer and performer. “Until then, I’m the closest gay male country artist you’re going to find!”

Turning serious, Bundy explains that the fearlessness that led her to buck Nashville trends with her new album Achin’ and Shakin’ came partly from witnessing the struggles of her gay friends to live without having to conforming to anyone else’s ideas of how to live. “I understand that struggle,” she says. “I’ve never really found a place where I completely fit in, and I’m happy about that. I never needed to be the homecoming queen. I’ve always done things my own way.”

Bundy is certainly blazing a path of individuality with Achin’ and Shakin’, her Mercury Records debut release. The singer-songwriter has bypassed the tried-and-true Music Row approach usually taken on country albums and instead created a bold concept album that is essentially two separate albums within one project.

The album’s title aptly describes the project’s division: Achin’ is a collection of slow and sultry country songs, and Shakin’ is a group of sassy songs that are equal parts humor, confidence and attitude. One side presents a modern-day mixture of Loretta Lynn, Minnie Pearl and Sex and the City’s Carrie Bradshaw; the other unveils country’s answer to Norah Jones. The first single, “Giddy On Up,” is an irresistibly upbeat and saucy kiss-off to a cheating lover, while the romantic “Drop On By” oozes sensuality as she beckons a lover to visit.

It’s no surprise that the Lexington, Kentucky-born Bundy is shattering the usual industry formulas because nothing about her entertainment career has been normal. Like two of her idols Reba McEntire and Dolly Parton, she traveled the musical highway that spans from Nashville to Broadway.

She originated the lead role of Elle Woods in the Broadway musical Legally Blonde, for which she received a Tony Award nomination. She also originated the role of Amber Von Tussle in the Tony Award-winning Broadway musical Hairspray and played Glinda in the smash hit Wicked. Prior to that, at age 9, she originated the role of Tina Denmark in the successful off-Broadway production Ruthless!, The Musical!, for which she received the Outer Critics Circle and Drama Desk nominations.

After a successful run on Broadway, she moved to Nashville in the fall of 2008 and spent 18 months creating Achin’ and Shakin’, an album that combines the traditional influences of her Southern heritage with the uniquely modern perspective that has been fueling her artistry since she was a child performer. “Songwriting and recording are my passions; this is my love,” she says. “There’s a part of myself that has come out that I really like, and it’s very important to me.”

Here, the singer talks about her journey from Broadway to Nashville, her “gay sense of humor,” and her touching debt to Legally Blonde’s Elle Woods.

Q: Tell me about the progression of your career from Broadway to country music. How did this come about?

LBB: (Laura Bell Bundy) I kinda think that it was less of a segue than everything happening at one time. I’m from Kentucky, and I grew up listening to a lot of country music.

My grandfather was a radio DJ, and he had a large collection of country songs. My mom was a big fan of Dolly Parton and Loretta Lynn, and we also listened to a lot of countrypolitan, which has been a big influence on this album. And my father is from Muscle Shoals, so I learned about Southern soul music from him. All of that has inspired the combination of country and soul that you hear on this record.

LBB: Yes, when I was a young kid, I moved to New York to do theater. I was fortunate enough to be in the Radio City Christmas Spectacular at 9-years-old. Then, I was in the musical Ruthless! The Musical, which became a cult show in the gay community. Britney Spears and Natalie Portman were my understudies. But then I moved back to Kentucky to be normal and go to high school.

After doing a show with drag queens and being raised by the two gay men who composed the show, I was having an identity crisis.

Q: When did you start writing songs?

LBB: When I was 18--and everything just came out country. I formed a country band, and we got gigs in various clubs. But I was also still pursuing acting at that time. I moved back to New York, did a soap opera, and then got Hairspray, my first Broadway show. So, I was doing both theater and country simultaneously. Theater took off first for me because I wasn’t living in Nashville. You get a Broadway show, you’re going to do it.

Q: I know you have actually put an album out before Achin’ and Shakin’ called Looking for a Place Already Gone.

LBB: Yes, after I did Wicked on Broadway, about six months before Legally Blonde, I put out a country album independently. I missed writing and signing country music. I called my style “Y’allternative.” I’m happy with that album as far as it being a jumping off point for me. But I’d like to think of Achin’ and Shakin’ as my first album. I devoted a year and a half to this, and it’s the culmination of all of my experiences and the emotions I’ve always felt.

Q: I’m curious—why didn’t you choose to do a pop album or an album of standards, as people might have expected you to do?

LBB: I never gave it a thought that I would be signing anything other than country. It was already what I had been performing. Maybe there’s been the idea that my songs could crossover, but this is the kind of music I’ve always wanted to do.

Q: Are you a fan of show tunes?

LBB: I love musical theater, but I don’t listen to it; I don’t have any cast albums on my iPod.

Though I have to say, I’m

actually writing a musical now. But the music is going to be the way it used to be, where the songs that were in shows actually became the popular music of the day. But for me, ultimately, the stuff that makes me really go wild is country, soul, classic rock, and indie rock.

Q: What was the idea behind making a “two-sided” album—half of it “Achin’” and the half of it “Shakin’”?

LBB: The “Achin’” side is traditional country meets soul ballads. Tammy Wynette meets Norah Jones and Ray Charles. It’s for when you’re in a reflective mood, like when you’re trying to drown your sorrows. The songs on the “Shakin’” side you can really dance to, and they have more of a sassiness and a sense of humor. They two styles represent the different parts of me. I’m not bipolar, but I have both a crazy wild side and a more reflective side that really likes to get to the source of my pain. I wrote or co-wrote every song on the album except one, so they really come from my own personal experience.

Q: I know the first single “Giddy On Up” has been remixed for clubs. What do you think of it?

LBB: When I heard the first version of it, I was freaking and jumping up and down. It’s so much fun. They had to speed up my vocals, so I sound like a country chipmunk. I love it because my favorite way to blow off steam is to dance. I love going to gay clubs because I can throw caution to the wind. Some guy is not going to be coming up and grinding on me. And I’ll always get someone telling me how much they like my dress. Gay men have taught me some of my best dance moves.

Q: You have a sizable gay fan base from your Broadway and Off-Broadway work. Why do you think gay people are drawn to you and your work?

LBB: I think I have a gay sense of humor—it’s off-the-cuff, it’s kitschy, it’s campy. Maybe that’s because almost everything that has ever been written for me was written by gay men. The most creative people in my life have been gay people. It was gay men who taught me to sing and to hone my talent. It began when I was doing Ruthless! Off-Broadway when I was 10-years-old. The show was very campy. But even before that—when I was 8, my favorite movie was Hairspray. And of course, I loved all of the films that are iconic to gay men: All About Eve, The Bad Seed, Mommie Dearest. Overall, there’s just something about the gay experience--particularly coming out of the closet to live life as you really are--that I totally relate to.

LBB: Gay people have taught me there there’s really no “right” way to live—it’s all okay. That’s helped to bring me to the place I’m at now where I’m not afraid of anything anymore. I’m the most fearless I’ve ever been. It’s interesting for me to be in the country music community—you don’t know how open-minded people are going to be. But I think it’s important to treat people equally, regardless of color, sexual preference, or religion. I love people from the South, and I love traditional values, but I will not repress my love for gay people. It makes me really happy that my music is being marketed to the gay community. It’s like I’m getting my own coming-out party.

LBB: Besides my grandparent’s marriage, the strongest examples of committed long-term relationships in my life have been between gay couples. I don’t see how my idea of marriage could be threatened by the committed, loving relationships that many gay people have.

LBB: The experience of playing that character every night was so positive and so much fun.

Elle taught me not to be afraid to be myself. She also taught me that a person can have a bubbly personality and not be stupid. She was also so open, loving, and accepting of all. I actually get a little emotional talking about it. I grew up with that character, and she grew up with me.