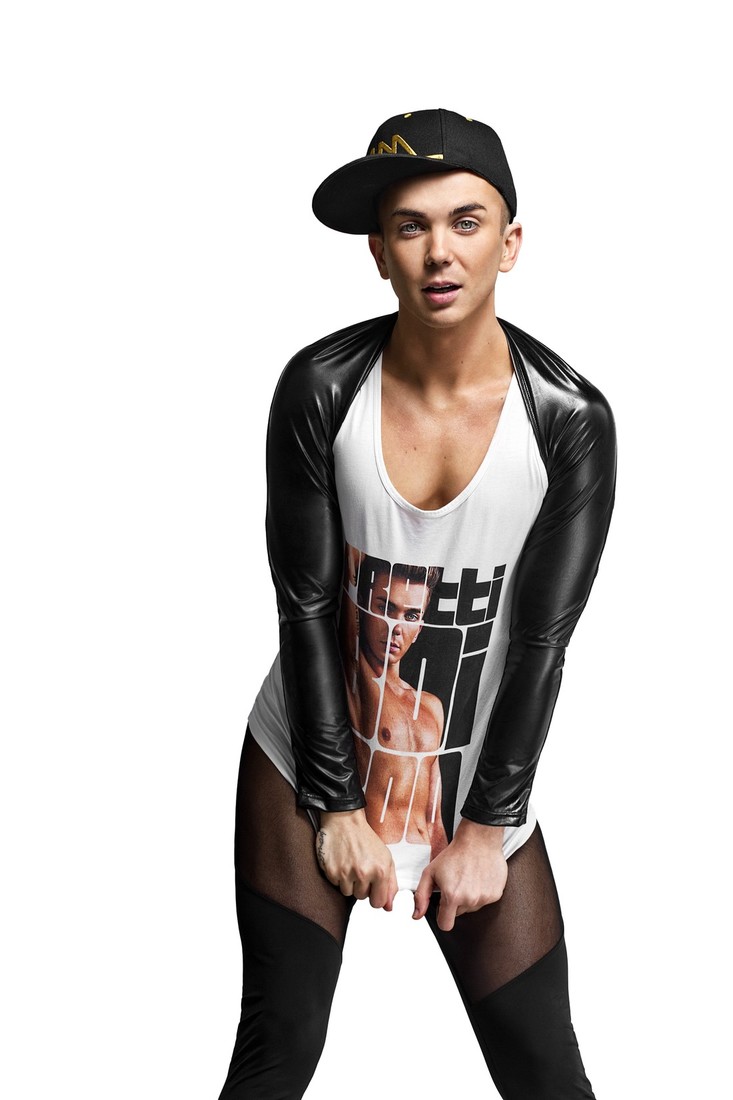 photo credit // nick hernandez
PrettiBoiRoq released "Wanna Be Me" in mid-October, a direct shot at online trolls who body-shamed him after his last music video went viral.

Wanna Be Me "is essentially my fuck-you to everyone who had some slick things to say behind a keyboard," said PrettiBoiRoq, 29, who was born and raised in North Carolina and now calls the West Coast home to further his hip-hop career. "At face-value, the song will seem to talk about a particular person, but I don't have beef with anyone worth mentioning. It's my comeback; it's me saying I'm here to stay, that I'm not fazed by the words of others."

"Wanna Be Me" was written after some of the hateful words said about the "You Don't Own Me" video. "I wasn't expecting the video to do as well as it did, and I guess I wasn't ready to let the bad in with the good," he said.

"It's funny ...I feel our community already faces so much hate, yet we, especially gay men, are so quick to attack one another. When I shot that video I literally went on a super restricting diet to slim down, not that I really needed to. There were a lot of people who called out the fact that I don't look (a certain way), but I shouldn't have to; I get paid to make music.

"At first I was mortified (at the body-shaming comments), and I'm not going to lie, when we shot 'Wanna Be Me,' I was much more self-aware than I was in 'You Don't Own Me.'

"In the end, I was like fuck it; you have to accept yourself, your flaws, your imperfections, all of it. So I'm glad I went through all of it, because I think it forced me to love myself unapologetically."

He added, "I think Wanna Be Me is a really fun track, and it can be taken on so many different levels. People can identify as a diss, as empowerment, whatever they want. I like tracks like that, multifaceted and somewhat tongue-in-cheek."

In the Wanna Be Me video, PrettiBoiRoq is the master of some beautifully sculpted men.

The video, he said, "was me taking back my power in a playful and sexy way."

"I wanted to do something completely different, my first two videos were self-directed. This video I trusted a professional to help me really hit the next level visually."

"I am working on finishing my second EP, which I think will blow people away in comparison to my first body of work," he said. "I am also going to start promoting my music through live performances, (getting) out there and really connecting with the fans I've made over the last two years.

"I really just want to have fun and do what I love. I think people, especially the younger generation, need artist that they identify with. I don't think the gay youth really have that; I want to be the start of a new generation of artist that can be mainstream and relatable to both the LGBTQ and the straight community."

Nicki Minaj: "Hands down, my biggest influence; her lyrics and flow are truly amazing. In my opinion, she is one of the greatest hip-hop artists of all time."

Describing PrettiBoiRoq: "I am an out hip-hop artist who pulls from his Southern roots. I think a lot of mainstream artist who are out play the field very safe, (whereas) my lyrics and content are very unapologetically queer, and I think people love it."

Listening To Of Late: "I am currently obsessed with Lil Wayne's Carter V album; the man is a genius behind the mic."

Celebrity You'd Most Like to Meet: "Living ...President Obama, who was the first president I voted for, and I adore him. Dead ...James Dean, for obvious reasons."

(Complete the sentence) Many will be surprised to know ... "I actually went to college for visual arts, not music. I never finished my degree, but I do have five years of collective college under my belt, and a couple of 'almost degrees.'"

Being LGBT in the Hip-hop World: "It's hard. Hip-hop is a straight, male-dominated industry. You look at mainstream, even straight women, have a hard time finding footing within the community. LGBT artist are looked down upon simply because mainstream hip-hop is still extremely homophobic. But if we don't fight, it won't change; we have to fight for our place in the community just as women did."

The LGBT Community: "I am a huge advocate for the trans community, especially trans minorities. We live in a country right now that is being torn apart by hatred and bigotry. We need to really step up as a community to end transphobia, not first in the world, but first within our own community. I also advocate for Black Lives Matter and have donated to the organization. As a white male in society I think it's our job to speak out since at the present time we have the loudest voice, gay or not."

Coming-out: "I was kind of forced out to most people. I started dating my first boyfriend in high school. We slowly started coming out to some of our close friends, just to make it easier to hang out. Eventually I hired him at the restaurant I was managing so we could spend more time together. Well we got a little too comfortable and eventually were caught making out by my step mother, who in turn made me tell my dad. From there it just kind of snowballed out of control and the whole town knew. Growing up in the Bible-belt, this was not a great thing for a kid in high school, but I survived. It originally put a huge strain on the relationship with my parents, but in the end it truly brought us closer together."

Single or Dating: "I don't like to divulge my personal life, some aspects should be kept private. But I will say my main relationship is with my career; my music is my significant-other at the moment."