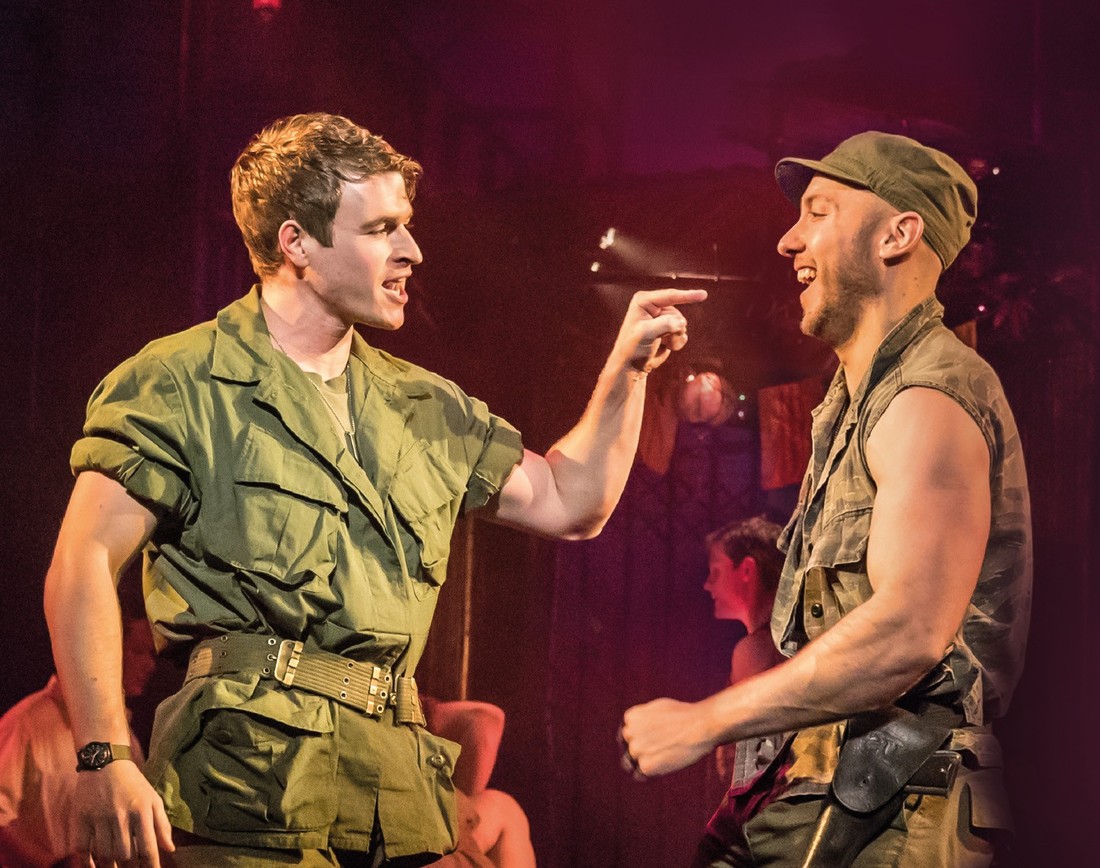 ashley gilmour as chris in the uk tour

This acclaimed musical tells the story of a young Vietnamese woman named Kim, who is orphaned by war and forced to work in a bar run by a notorious character known as the Engineer. There she meets and falls in love with an American G.I. named Chris, but they are torn apart by the fall of Saigon. For 3 years, Kim goes on an epic journey of survival to find her way back to Chris, who has no idea he's fathered a son.

This new production features stunning spectacle and a sensational cast of 42 performing the soaring score, including Broadway hits like "The Heat is On in Saigon," "The Movie in My Mind," "Last Night of the World" and "American Dream."

"It's hard to believe that it has been over 27 years since Miss Saigon first opened in North America," remarked Cameron Mackintosh. "But, if anything, the tragic love story at the heart of the show has become even more relevant today with innocent people being torn apart by war all over the world. This brilliant new production, directed by Laurence Connor and featuring the original dazzling choreography by Bob Avian, takes a grittier, more realistic approach that magnifies the power and epic sweep of Boublil and Schönberg's tremendous score. Of all my productions, despite its popularity, Miss Saigon is the one that the public has had the least chance to see as it requires such a huge international cast of Asian and Western performers and a vast array of visually stunning sets. Now, for the first time in 17 years, as it continues to wow audiences in major cities around the world, theatregoers across America will be able to see one of the most spectacular musicals ever written in all its glory, in a new production that critics in London and on Broadway have embraced."

Red Concepción will lead the tour as 'the Engineer' direct from the current U.K. Tour, Emily Bautista will play 'Kim' having also performed the role in the most recent Broadway production and Anthony Festa will play 'Chris.' Joining them will be Stacie Bono as 'Ellen,' J. Daughtry as 'John,' Jinwoo Jung as 'Thuy' and Christine Bunuan as 'Gigi.' At certain performances, the role of 'Kim' will be played by Myra Molloy.

Red Concepción is currently receiving rave reviews as the Engineer in the U.K. Tour of Miss Saigon. His many theatre credits in his native Philippines include 'Adam/Felicia' in Priscilla: Queen of the Desert for which he won the ALIW Award and Gawah Buhay Award, 'Tommy' in The Normal Heart and 'Alan Strang' in Equus, as well as the musicals West Side Story and Hairspray.

Emily Bautista made her Broadway debut in The Broadway revival of Miss Saigon where she understudied and played the role of 'Kim.' She has been most recently seen as 'Éponine' in the current national tour of Les Misérables.

Anthony Festa has most been recently been seen in NYC in the Outer Critics Circle Award-winning best musical, Desperate Measures. He has also toured with the companies of Wicked and Finding Neverland and played Tony in West Side Story in the West End and on International/UK Tour.

J. Daughtry has been seen on Broadway in Beautiful—The Carole King Musical and The Color Purple. His TV appearances include Boardwalk Empire, Law & Order: SVU, Elementary and Orange is the New Black.

Stacie Bono has been seen Off-Broadway in the Barrow Street production of Sweeney Todd (Beggar Woman/Pirelli) and Avenue Q (Kate Monster/Lucy T. Slut). Regionally, Stacie has been at the Guthrie Theater, Tuacahn and Denver Center.

Jinwoo Jung was born and raised in Korea and was most recently seen Off-Broadway in K-Pop. He has performed regionally in La Cage aux Folles (East West Players), The Christians (Mark Taper Forum) and will appear in M. Night Shyamalan's upcoming new film Glass.

Miss Saigon includes music by Claude-Michel Schönberg with lyrics by Richard Maltby Jr. and Alain Boublil, adapted from original French lyrics by Alain Boublil, with additional lyrics by Michael Mahler. The new production is directed by Laurence Connor with musical staging by Bob Avian and additional choreography by Geoffrey Garratt. Production design is by Totie Driver and Matt Kinley based on an original concept by Adrian Vaux; costume design by Andreane Neofitou; lighting design by Bruno Poet; projections by Luke Halls; sound design by Mick Potter; and orchestrations by William David Brohn. Music supervision is by Stephen Brooker and James Moore, with casting by Merri Sugarman for Tara Rubin Casting.

Since its London premiere in 1989, Cameron Mackintosh's production of Alain Boublil and Claude-Michel Schönberg's epic musical Miss Saigon has become one of the most successful musicals in history. The original Broadway production of Miss Saigon opened on April 11, 1991 with what was the largest advance sale in Broadway history ($37 million). The show went on to play for nearly ten years with 4,111 performances and was seen by more than 5.9 million people.  Miss Saigon has been performed in 32 countries, over 350 cities, in 15 different languages, has won over 70 awards including 2 Olivier Awards, 3 Tony Awards and 4 Drama Desk Awards and been seen by over 36 million people worldwide.

The new production of Miss Saigon opened in London in May 2014 to record-breaking advance sales and critical acclaim. The Daily Telegraph wrote, "This thrilling new production spills out beyond theatre and speaks directly to the times we live in—magnificent performances." The Daily Mail said, "The greatest musical of all-time just got even better!" The London Times called the production "thrilling, soaring and spectacular." NY1 proclaimed "the new Miss Saigon soars to the rafters!" And The New Yorker called Miss Saigon "a dynamite Broadway revival!"

For tickets and information, visit BroadwayInChicago.com.