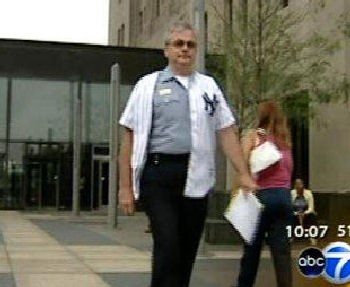 photo credit // abc 7 chicago
Chicago, IL - A Chicago police officer who has had several federal civil rights lawsuits filed against him will not be indicted.

Cook County State's Attorney Anita Alvarez will not press criminal charges against officer Richard Fiorito, who works the night shift in the heart of Boystown. Of the nearly 40 people who have filed lawsuits against Fiorito, a large proportion are gay or lesbian and claim the officer made anti-gay comments during allegedly phony DUI arrests.

The Cook County State's Attorney's office claims it investigated the cop for nearly a year following allegations that he was making false DUI arrests in order to rack up overtime pay, but ended its investigation Monday night.

Alvarez spokesperson Sally Daly told ChicagoPride.com, "After a thorough and complete investigation, the evidence was not sufficient enough…to prove in a court of law accusations such as perjury or official misconduct."

Daly said that Fiorito will not face criminal charges because of inconsistencies between the allegations made in civil lawsuits and the evidence Alvarez' office obtained during its criminal investigation. Daly added that there were also inconsistencies in the testimony given by several witnesses.

An attorney familiar with the case told ChicagoPride.com that while Alvarez' office claims that the investigation took a year, they only spoke with four individuals last June, "so the ‘year-long investigation' was one month."

Because Alvarez' office continued to use Fiorito as a witness in cases long after they began their investigation, the attorney added, not charging the cop was the only "politically tenable" position they could take.

"If they indicted, they would have to admit they were using a dirty cop against innocent people," the attorney added. "This decision was made a long time ago."

In response to the criticism Alvarez has received and the accusations that she made up her mind a long time ago, Daly said, "That couldn't be further from the truth."

"She has not been reluctant or afraid or shy or intimidated when it comes to investigating police officers. But we have to have the evidence."

Daly added that Alvarez was upset by the accusations, and took the investigation very seriously.

Activist Andy Thayer said he is not surprised by Alvarez' decision. He noted that weeks ago, he revealed that an inside source leaked information that Alvarez would not indict Fiorito, but her office labeled his allegation a rumor. "That was a bald-faced lie. They did it right on the eve of the primary election in hopes of getting it buried," Thayer said. "The decision itself was purely political."

According to the Cook County State's Attorney's office, Fiorito will not return to being used a witness in DUI cases quite yet. The Chicago Police Department is still conducting an internal investigation. Alvarez' office, according to Daly, will make a decision following the results of that investigation.

Attorney Jon Erickson, who represents a large number of individuals with lawsuits against Fiorito, would not comment.