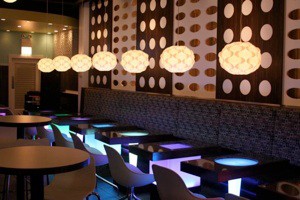 Chicago, IL - After years of anticipation and months of renovation, Rehab, a Cocktail Café, will celebrate its grand reopening VIP reception on Tuesday, January 26th at 7:00 pm hosted by Miss Foozie. There will be a public Grand Opening reception on Tuesday, February 2nd hosted by Miss Foozie and there will be a special tribute to Rita, the original Rehab bartender that since then has passed on, but still lives in our hearts today.

The swanky new Rehab, located at 3641 N. Halsted, is a martini bar/café concept featuring a cocktail menu of premium martinis, mojito's and other specialty drinks. Bottle service (both wine and spirits) will be available. A café menu of small portion dining, including: appetizers, sandwiches, soups, salads and gourmet pizzas will be added in the spring when the kitchen opens.

Co-owner Patrick Harms said, "The time was right to reopen this Boystown destination. Now that the spectacular LGBT Center on Halsted is open across the street, along with the popular Whole Foods, we've witnessed a high increase in traffic to this end of Halsted Street."

Rehab began as Halsted Street Café in 1996 when co-owner Mike Macharello opened a cd store/coffee & juice bar. It was redesigned and renamed Rehab in 1999 when it became a martini video lounge. Rehab closed in 2005.