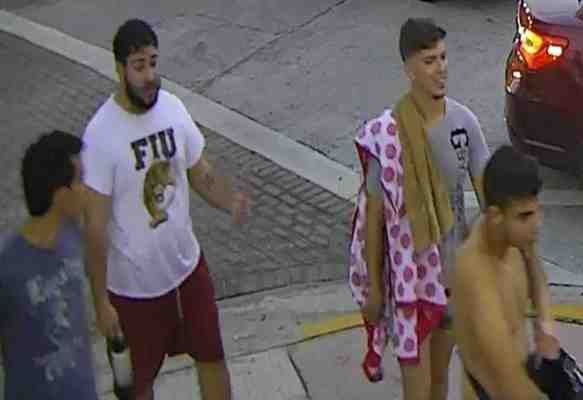 According to the Miami Herald, the men – Juan C. Lopez, 21; Luis M. Alonso Piovet, 20; Adonis Diaz, 21; and Pablo Reinaldo Romo-Figueroa, 21 – surrendered to the Miami Beach police department through an attorney and will likely face felony charges.

Rene Chalarca and Dmitry Logunov, both 32, were attacked on Sunday as they walked home from the parade.

"We were walking and holding hands and needed to use the bathroom," Logunov told the South Florida Gay News.

Logunov was called a "faggot" in Spanish and beaten unconscious as he walked out of the public bathroom. When Chalarca intervened, three men attacked him. The four men also attacked a good Samaritan, identified as Helmut Muller, who came to the couple's aid.

The couple criticized the police's response. They said the officers refused to chase the men, who were still visible in the distance. And a female officer told Logunov to "stop the drama" and "shut the fuck up."

Paramedics who treated the couple at the scene told them to go home. Later, they decided to go to the hospital on their own and discovered that Chalarca had a broken tear duct and might need surgery.

The attack was recorded on video. The Miami Herald reported that the men have been charged with aggravated battery and that it is up to the state attorney's office to decide whether to classify the attack as a hate crim