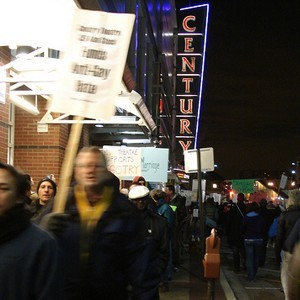 The boycott of Cinemark theaters launched over its donation to a gay marriage ban in California is expected to end January 1.

The boycott began last year after gay social groups learned that CEO Alan Stock contributed $10,000 to the campaign to pass Proposition 8, the voter-approved referendum that banned gay marriage in the Golden State.

Stock is a member of the Church of Jesus Christ of Latter-day Saints (the Mormons), whose leaders appealed to members to support the ban, resulting in millions of dollars and thousands of man-hours' worth of Mormon contributions.

Leaders of the boycott said this week they would end their boycott due to the company's plan to extend benefits to the spouses of gay and lesbian employees on January 1.

"This is a step in the right direction," Dave Hayes, founder of San Francisco Movie Bears, said in a blog post at the group's website. "We're happy that Cinemark has made this decision, but we plan to keep a close eye on them and Mr. Stock."

Leaders of the movie-going club estimate the boycott cost Cinemark over $20,000 in ticket sales alone.

"The LGBT community and all our friends have tremendous spending power and corporate America knows that," he said in an email to On Top Magazine. "They [boycotts] have changed corporate policies 180 degrees, including support for gay and lesbian organizations."

"It would be inappropriate to influence our employees' position on personal issues outside the work environment, especially on political, social or religious activities," the company said in a statement when the boycott was first announced. "Any individual act or contribution is just that, individual acts of personal expression and do not reflect company positions or policy."

Hayes didn't accept that explanation, saying his group was not going "to patronize a company whose top person encourages hate."

Boycott organizers continue to call on Stock to offer an explanation and an apology.