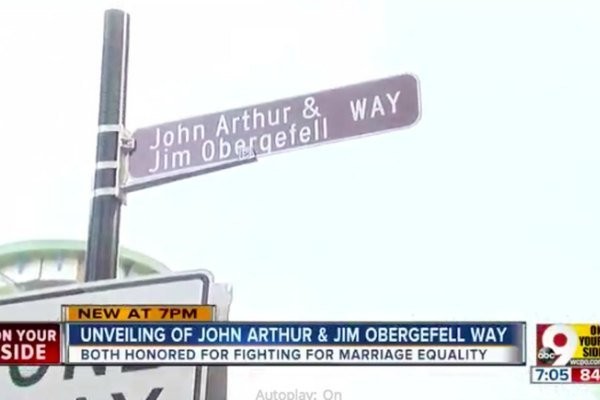 Cincinnati, OH - Cincinnati has honored the lead plaintiff in the Supreme Court case that struck down state bans that excluded gay and lesbian couples from marriage.

Jim Obergefell and his husband John Arthur challenged Ohio's voter-approved constitutional amendment that defined marriage as a heterosexual union after the state refused to recognize their Maryland marriage. The couple married on the tarmac of a Baltimore airport. Arthur died from ALS in 2013, but Obergefell continued their case.

Members of the City Council voted unanimously to give Mercer Street the honorary name of "John Arthur & Jim Obergefell Way."

In 2015, the Supreme Court ruled in Obergefell that gay couples have a constitutional right to marry.

"John always wanted to leave a mark in Cincinnati," Obergefell said at Wednesday's unveiling. "That was something he really wanted to do. He didn't have that chance, but now he does. I'm grateful and I know John would be as well."