That 'Black Girl Magic' has us in its spell 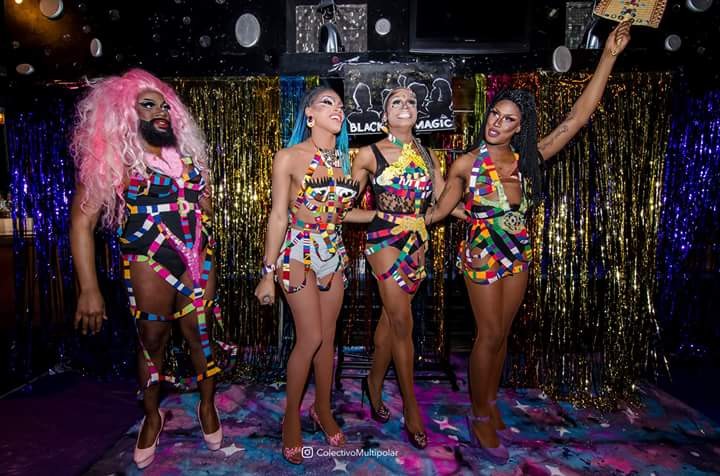 If you haven't heard of Black Girl Magic -- a fun, fierce and revolutionary all-black drag show -- then get yourself to Berlin Chicago next Thursday, June 22, for a Pride show that'll kick off your Parade weekend right.

This will be BGM's fifth show in seven months and already they're drawing crowds of 200 people (on a THURSDAY night) to cheer on and celebrate black femininity and queerness.

"The show came out of the black queens being eager to work together," The Vixen, one of the founders and organizers of Black Girl Magic, told ChicagoPride.com. "Many of us have built successful careers separately but there used to be an unspoken yet obvious rule that you only need one black queen in a show -- as if we were all the same or only had one thing to offer."

"What's great is now you get all these special ladies under one roof and you see how diverse and complex black queens can be," she continued. "We get to explore all sides of our characters instead being booked to be the dancing queen, or the hip hop girl. At BGM we get to break the mold."

Initially conceived of as a standalone special event, the first BGM drew a crowd of over 100 people to Berlin. The queens realized that they were giving gay Chicago something it not only wanted, but needed.

"The loving energy in the room was surreal; everyone who came came to support black drag," The Vixen recalled. "We were all moved to tears at some point. It was supposed to be a one time thing but it was obvious that this was important to the community."

In a short time, the show has taken off. Each Black Girl Magic now features a cast of about 10 queens, making for a diverse performance that showcases the breadth of creativity and expression in black drag. Audiences have been treated to everything from dancing queens in fat suits a la Missy Elliot's iconic "The Rain" look to pageant queens twirling their cape in a tornado that tore down all the decorations -- literally bringing the house down.

The shows are organized around strong themes: the first felt like a protest rally and featured lots of hip hop; an Afrocentric show celebrated Black History Month in February; and in April they payed homage to specific black legends. One of the most unique things about Black Girl Magic is the format of the show, with each queen performing not just a number, but for 10 to 20 minutes each -- "it's like being at a music festival where the bands are drag queens," The Vixen said.

The cast is constantly changing to showcase all the local black queens making moves in the scene and welcome them into the sisterhood.

"I'm a Chicago native born and raised on the South Side, so for me Boystown has always been a place that felt out of my reach," The Vixen said. "Making it as a black queen on the North Side was very rare. Staying present in a community where you are not always welcomed or respected took a lot of dedication. When there are so few spots available for queens of color it becomes very competitive. I wanted to create a show that shows that black queens can support each other and give black queens a platform to express themselves without having to water it down to fit a mold."

The BGM show on the 20th is going to be their biggest spectacle yet, according to The Vixen. Male black femme gogo dancers will appear before the show, with the legendary DJ Derrick Carter closing out the night. This Black Girl Magic will also feature two female burlesque performers -- Po Chop and guest host Jeez Loueez -- which The Vixen says is important because she "wants the gay community to celebrate the beauty of black women of all kinds."

"The best part of the show is the energy from the crowd," she continued. "For us queens, seeing a crowd of people come out specifically to support black drag is so moving. I love to do random shots with black girls in the audience. Because they're my inspiration."

And as for the future? Back in January, Black Girl Magic travelled north to Milwaukee to start a sister chapter with the queens at D.I.X., and The Vixen hopes to continue reaching out to other cities and communities -- bringing them the magic BGM has stirred up in Chicago.

"I travel to small towns often and I see the lack of diversity and what it means for people of color to be represented onstage," The Vixen said. "This year in Iowa City a black boy ran to me crying because he knew who I was and wanted to do drag but didn't feel supported in that community. That made me realize the reach and the impact of the show. I hope other towns start their own chapters. Let's make a movement."

Black Girl Magic's Pride show is next Thursday, June 22, at Berlin (954 W Belmont) from 10 p.m. until 4 a.m. For more information and a list of all the queens performing, check out their Facebook event.