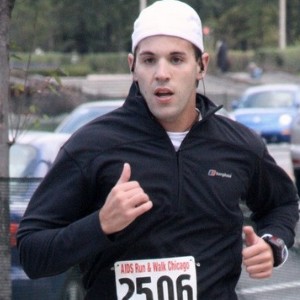 photo credit // kevin wayne
Chicago, IL - Despite early rain and cool temperatures on Saturday morning, thousands of people ran and walked at the AIDS Run & Walk 2009 in Grant Park, making it one of the largest and most successful events to day.

Organizers of the annual 5K event, which benefits the AIDS Foundation of Chicago and more than 70 local AIDS organizations, anticipated more than 7,000 people would participate.

Before the event began, participants gathered in the Health & Fitness Village, which was sponsored by the Illinois Department of Public Health, for demonstrations and performances.

Among the performers were Miss Foozie, Chicago Spirit Brigade, R&B artist Adam Emil, spoken word by Young Chicago Authors, Silent Obsession, DJ Casper, The Joffrey Ballet Middle School Dance Club, the popular James Brown funk band, Get Up With The Get Downs and a number of other acts.

The cast and crew of Jersey Boys sang the national anthem and then joined the walk.

Thousands participated in the run and walk, both individuals and teams, which included high schools, colleges, corporations, churches, health centers and non-profit organizations.

Since it was established in 2001, AIDS Run & Walk Chicago has netted more than $2 million to battle the epidemic.