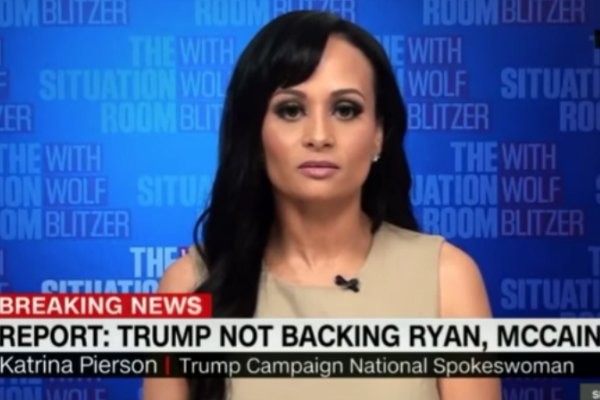 In his speech at the GOP convention last month, Trump said that he would protect the LGBT community. Earlier, he said that he was a better "friend" to gays than Hillary Clinton, his Democratic rival.

In 2012, Pierson, who actively supported Ted Cruz in his Senate race and appeared on stage with him on election night, messaged during a Twitter conversation that "Gay is not normal, accept that."

"Even getting 'married' in a church doesn't make it a marriage," she tweeted.

"It's a long reach to go back to 2012 to try to create a new hit piece and call it relevant," Pierson answered. "You'll also find that as a grassroots volunteer for multiple campaigns, it's quite common that Twitter is a platform to promote/defend the policies and values of the candidates at the time. Many times, it's about engaging trolls which can lead to humorous and sarcastic banter."

"I'm sure you'll also find that the positions/values of the candidates are not necessarily a sole reflection of the individual promoting or supporting said candidate."

"Therefore, there is nothing to square," she added.