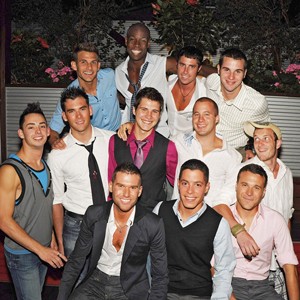 Bud Boyz, the event of the summer, was based on talent and the crowd

Chicago, IL - Over 800 people packed Sidetrack on Wednesday night to watch 12 hot finalists compete for the four coveted spots as 2009 Bud Boyz as an exciting two-month search for Chicago's hottest guys drew to a close.

"We were overwhelmed by the success of the preliminary events and the finals here at Sidetrack," said Chuck Hyde, Sidetrack General Manager.

Bud Boyz Executive Producer Gehrig Peterson of Media Consultants concurred, "It was over the top and beyond anyone's expectations, we knew it would be big but this was crazy big and a lot of fun. It was an incredibly tight competition on the voting and until the final ballots were counted, we didn't know who was going to win!"

"I was amazed at the amount of times that Bill yelled, ‘marry me' to the contestants while they were on stage," joked Peterson.

"It's true, the guys were really hot," laughed Pritchard. "I was also impressed with their individual answers to the questions and their overall energy on the stage. Brains with beauty get my vote any time!"

The Bud Boyz will begin their appearances at Market Days, including the ChicagoPride.com booth, and at bars throughout Chicago in 2009.

Bud Boyz on the Web:
www.budboyz.com