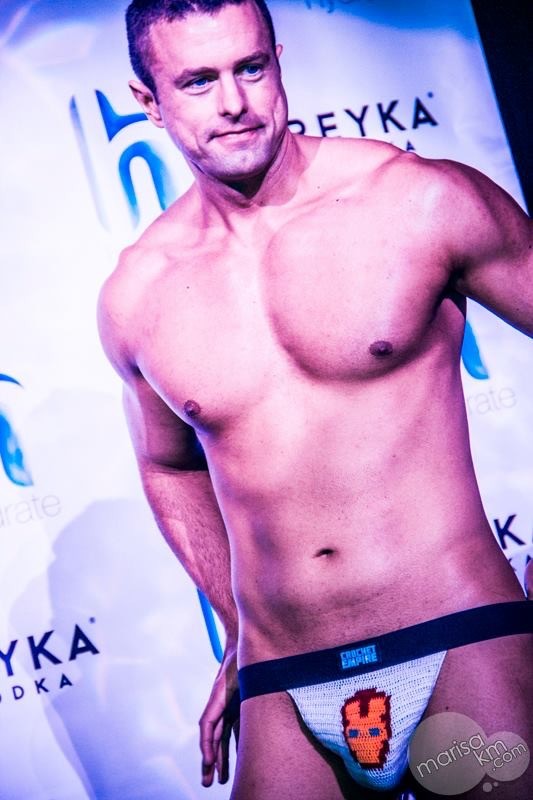 Whether you're looking for a unique, sexy new jockstrap for IML this year or something fun and comfortable to show off in for all your impending summer flings, don't miss local company Crochet Empire's second annual benefit fashion show for their line of handmade crocheted jockstraps.

On Sunday, May 15, some of the hottest men in the adult entertainment and nightlife industries will strut their stuff on the Hydrate stage for MANIMALS: Jocks Fur A Cause. The fashion show, featuring host Dixie Lynn Cartwright and a slew of performances, will again benefit two local HIV charities and feature an auction for the jockstraps being worn by the models on stage.

But, let's get back to CROCHETED JOCKSTRAPS.

"The first big hurdle is getting over the craft notion, that these are a gimmick -- these are not a novelty item, they're actually something you can wear," creator Andy Boyer, a Chicagoan of a dozen years, told ChicagoPride.com. "Basically once people have them, they say they wear them all the time...People automatically assume they're gonna be like your thick wool scarf wrapped around your junk and be both hot and really itchy, so at events I always encourage people to touch them and they realize that they're actually really soft, really wearable."

The jockstraps are all handmade, machine washable and come in the traditional yarn and also in crocheted leather, each bearing signature blue argyle straps matching the argyle Crochet Empire logo on the waistband.

Boyer, a native of Maine, says he learned some basic crochet techniques as a kid. His mother and both grandmothers crocheted and he recently learned that it was actually his paternal grandmother who taught his mother, who then turned around and taught her mother, Boyer's "Beebo" who he most associated crocheting with when he was young.

Just over three years ago, want for a hobby and nostalgia set off by a sort of surrogate grandparent dying gave Boyer the desire to revive the old family tradition, but he had no idea where it would lead. He hopped on YouTube and after some struggle (remembering his first attempt he says "I was in there cursing the heavens because I had literally produced nothing -- literally nothing in 2 ½ hours") got back into the swing of things.

And then, like it does in so many stories these days, the Internet happened.

"The first jockstrap was made as pretty much...a gag gift for a now ex of mine," Boyer said. "He and I were both kind of showoffs, so there were some pictures on social media and people were like 'that's awesome -- I want one' and it just kind of turned into this."

Boyer created a small Kickstarter in December of 2013 to raise funds for some basic equipment and a sewing machine (his previous experience amounted to middle school home economics and sewing a dinosaur costume one year for Odyssey of the Mind) and easily doubled his goal. He started on Etsy in early 2014 and for a year was hand making every jockstrap he sold by himself.

By early 2015 he was experiencing growth at a far greater rate than he could produce and shut down the shop for over a month to catch up on backorders and set about hiring himself a staff. Run primarily through Facebook, Boyer now has a group of 20ish members, some more active than others, who hand crochet jockstrap pouches and send them to Chicago where the waistbands and straps are sewn on.

"They actually are really comfortable and that's kind of amazing," Boyer says. "And they're actually really, admittedly unintentionally, kind of flattering. Something about the pouch is lifted out. They wear all day, they're breathable...and supportive...and sexy."

Last May, Boyer held a superhero themed jockstrap fashion show (inspired by a friend in Geeks OUT) as a way to help raise awareness for Crochet Empire and money for Chicago House and the Test Positive Aware Network, who he'd been supporting for years through Ride for AIDS Chicago.

Boyer hired season six Drag Race winner Bianca Del Rio to host the event and recruited several of his hottest friends and local gogo boys to model the jocks and auction off those they wore to the highest bidder. The event was a success, raising over $6,000, and also helped Boyer find a new direction in which to steer his company.

This year, Boyer is focused on marketing Crochet Empire to two of the niche groups with whom he's had the most success: the fetish community and the geek/gaymer crowd. A glance through the collections of jocks currently for sale online reveals evidence of this:

Along with some more basic colored yarn jocks and a Christmas tree jock with tiny beads sewn in as ornaments are a plethora of superhero jocks from last year's show -- including everyone from Superman to Nightwing -- and jocks bearing the face of Darth Vader. There's the Mario Bros star, another featuring the Deathly Hallows symbol from Harry Potter and even one the colors of the Fourth Doctor (Who)'s scarf.

The fetish line features both bear and leather pride designs, pup bones and even a sexy see-through mesh jock. Most intriguing are the jocks in this line that are made using an actual thick leather thread, creating a unique crocheted leather pouch.

"The jocks are really different -- I think that's part of the attraction for a lot of people," Boyer said. "I think that's part of the attraction to the geeky/gamer line is not just that 'oh they make one with Green Lantern on it,' but I made one for someone that was Minecraft and like where are you gonna find a Minecraft jockstrap? But since we literally make every one and make them individually, it's not just like stamping out fabric and you have to make a thousand of them or whatever or it's not profitable, we do a lot of individual designs."

In fact, many of Boyer's orders are for custom jockstraps and it's this desire for customization that make both the fetish and gaymer communities such excellent markets. This year, Boyer is bringing his product directly to the people that want them by attending conventions popular among his target audiences.

He has upcoming planned trips to FlameCon, New York City's queer comic convention in August, and even managed to snag himself a booth at the infamous Leather Market at IML coming up in a few weeks (look for him on the balconies surrounding the main ballroom.) Boyer's on the move -- having attended both HavenCon in Austin and Cleveland Leather Annual Weekend (CLAW) already this year.

"I've kept a couple [jockstraps] for myself and wear them to these events when I go," Boyer said. "The other weekend in Austin I was wearing them all day long and was comfortable...I was all weekend at CLAW [too]. Sometimes only that."

It's May 15's animal print themed fashion show, however, that is at the pinnacle of Boyer's crochet empire. Boyer decided to go a different direction with MANIMAL and instead of recruiting hot local guys, he's hired some of the biggest and hottest names in the adult entertainment and nightlife industries to fly to Chicago and don his jockstraps.

"Aside from just ticket sales, the major fundraiser is a live auction of the jockstraps worn in the show," Boyer explained. "So we do that live on stage -- they literally wrap a towel around themselves and take off the jockstrap to give to the person."

That's right -- you could buy a jockstrap fresh off the body of Dirk Caber, Connor Maguire, Seth Fornea, Tayte Hanson, Scott Riley, Eli Lewis or Bryan Cole. And if you can't attend on May 15, but are still interested in a jock, Boyer is broadcasting the auction online via a Facebook live stream.

In addition to the sexy auction and fashion show, Boyer has hired several performers for the night. Chicago's own blonde belle bombshell Dixie Lynn Cartwright hosts, with a strip pole dance by Anghell, Seth Fornea's boyfriend Jared Bradford dazzling with song and the comedic stylings of Matteo Lane.

For all this and more, don't miss MANIMALS: Jocks Fur A Cause on Sunday, May 15 at Hydrate from 6-9 p.m. Tickets $20 and available online. Check out the event's Facebook page for more information and Crochet Empire's store and Etsy for more temptation.