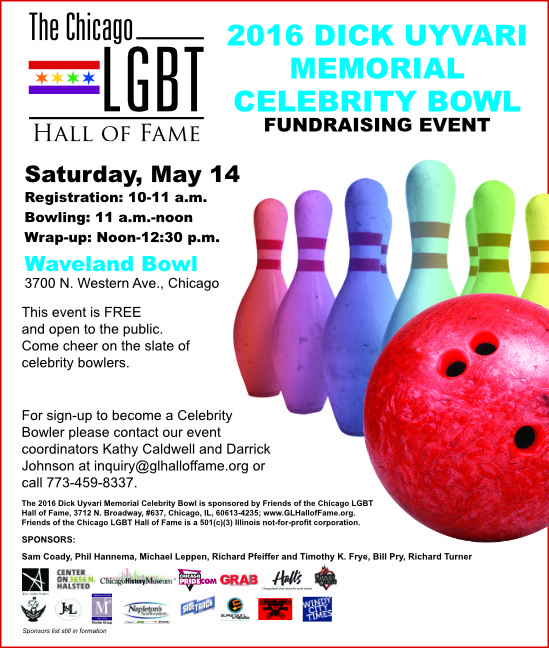 Chicago, IL - A major benefit for the Chicago LGBT Hall of Fame has been renamed in honor of the event's founder, who died last year. The 2016 Dick Uyvari Memorial Celebrity Bowl will be Saturday, May 14, at Waveland Bowl, 3700 N. Western Ave.

"We are excited to honor the legacy of Dick Uyvari," said event co-chairs Kathy Caldwell and Darrick Johnson. "Dick helped raise hundreds of thousands of dollars for various charities over the years, including for AIDS groups, Gay Games VII in 2006, and most recently the Hall of Fame. Dick and his late partner Joe La Pat are both inductees into the Hall of Fame for their commitment to the LGBT community."

People can support the event by either bowling and raising pledges from friends, or they can donate to a bowler or the event itself. For information contact inquiry@glhalloffame.orgor call 773-459-8337.

Donations can be sent to Friends of the Chicago LGBT Hall of Fame, 3712 N. Broadway, #637, Chicago, IL 60613-4235. The organization is a 501-c-3 nonprofit. Online donations can be made through Paypal. Those sponsoring a bowler can indicate their name on the memo line of the check, or in the additional information link on Paypal.