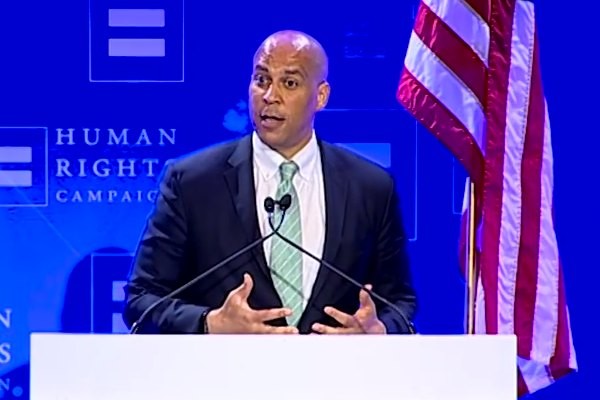 "We pay it forward by our conviction that here in America we cannot have a nation where, in the majority of our states, you may now be able to get married," Booker said. "But in those states, the next day after your wedding when you post your pictures on Instagram, Facebook, and yes, Snapchat, that the next day you could be homeless because you're kicked out of your housing, jobless because you've been denied your job based on who you are."

Booker said that he reminds himself to "stay faithful" when faced with obstacles.

"When I came down to Washington, and some days feel like I'm banging my head on an implacable wall when I can't get one Republican to sign onto a piece of legislation justifying and affirming rights and equality, I say these two words," Booker said, possibly referring to the Equality Act, a federal bill introduced by Democrats that would protect the LGBT community.

"I am motivated to get up everyday and fight for a president who is going to stand in our corner," Mook said. "Hillary understands that the fight for equality isn't finished until every American cannot only marry, but live, work, pray, learn and raise a family free from discrimination."