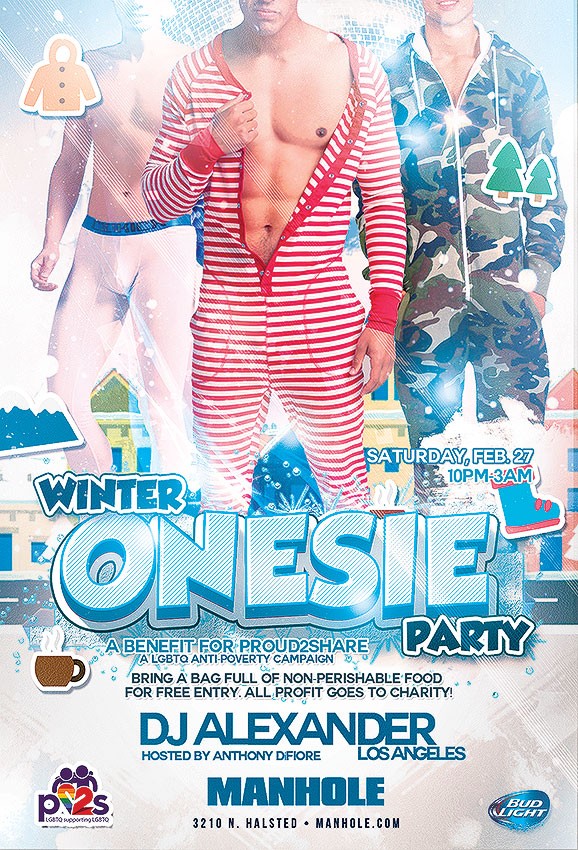 The Chicago Cubs last summer made the onesie a cool, fun look.

Starlin Castro was one of the Mario Bros.

Jason Hammel had a camouflage look

Justin Grimm had a shark look.

Several Cubs had Batman outfits, while Superman also was represented by the National League team.

DiFiore is changing that – and doing so for a great cause.

The event will feature DJ Alexander, a Neverland alumni who has spun at such parties as "Dia de los Muertos," "Bougie Ball," and "The Arcade," as well as GayGlow.

Instead of paying cover, attendees are asked to bring non-perishable food, such as canned goods, pasta, or soup. Or, the cover will be donated to Proud2Share, an LGBT anti-poverty initiative in the city.

Produced by DiFiore and the creative team at Neverland, this event "will create the kind of fun night that's expected of us, while raising money for an awesome cause," he said. "Every friend you bring, dollar you spend, or food you donate, will go to help LGBT Chicagoans living in poverty, struggling with homelessness and uncertainty.

"And what's better than getting to wear pajamas when it's freezing out?!"

"I know (many) guys in tank tops at Hydrate on a Saturday night (during the winter) are suffering, so this is a great excuse where dressing comfortable is 'in theme,'" DiFiore said. "It's the last Saturday in February. We get to wear pajamas, dance to great music, and celebrate that the worst two months of the year are over. Plus, (money) and food goes to making our community better."