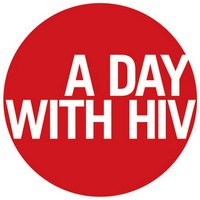 People across the world, whether HIV-positive or negative, are encouraged to share a moment of their day on 9/22/2015

Chicago, IL - On one day, Tuesday, Sept. 22, Positively Aware and TPAN are inviting everyone, regardless of HIV status, to get in the picture and participate in A Day with HIV, the magazine's sixth annual anti-stigma photo campaign.

On this day, people across the world, whether HIV-positive or negative, will visually capture and share a moment of their day – A Day with HIV – to focus attention on what it means to live in a world with HIV.

Each year over the past five years, A Day with HIV has established a single day in which people from all walks of life grab their smartphones or digital cameras and capture a moment of their day that tells their story.

Participants can record a portrait, time with friends and family at work or play, or any moment in the day that helps the world better understand how HIV affects their lives. This powerful dig¬ital photo initiative gives individuals an opportunity to create and experience the power of real-life storytelling through images, and unite in the effort to address stigma and contribute to changing perceptions about HIV.

"It is possible to stop HIV and the associated stigma that often assigns blame to people who acquire HIV, and even those who are actively seeking to prevent themselves from becoming infected," said Jeff Berry, Editor of Positively Aware. "But, together we must unite in this effort."

For the third consecutive year, Positively Aware and TPAN are working in partnership with Let's Stop HIV Together, an HIV awareness and anti-stigma effort of the Centers for Disease Control and Prevention (CDC), in an effort to extend A Day with HIV and empower even more people on social media to take action, get involved, and imagine A Day with HIV.

"These two campaigns share the same goals of raising general HIV awareness and combatting stigma," said Berry. "We're honored to be working together once again on this important initiative to tackle misperceptions, stigma, and discrimination and break down barriers to HIV prevention, testing, and care."

"As marked in the recent, first update of the National HIV/AIDS Strategy, great progress has been made both domestically and internationally over the last 30 years to combat HIV, although more still needs to be done," said Dr. Eugene McCray, Director of CDC's Division of HIV/AIDS Prevention who also served on last year's panel of A Day with HIV judges. "Together, we must do more, and this anti-stigma, photo-sharing initiative is a unique example of how we can use emerging digital tools and technologies to inform, educate, and mobilize communities across our nations to reduce and transform the perceptions associated with HIV and AIDS. Let's all do our part to stop HIV together on A Day with HIV."

By joining forces with A Day with HIV on Tuesday, September 22nd, we can all do our part to help eliminate the stigma often associated with HIV. To learn more about this year's initiative, view last year's pictures, and get tips on how to snap your best photo visit www.ADayWithHIV.com. Photos taken on Tuesday, September 22nd need to be submitted by Friday, September 25th on the A Day with HIV website or emailed to photo@adaywithhiv.com. Photo submissions will be featured on www.ADayWithHIV.com and select photos will appear in the November/December issue of Positively Aware. Four pictures will be chosen by a panel of judges to be featured on four different covers of the magazine.