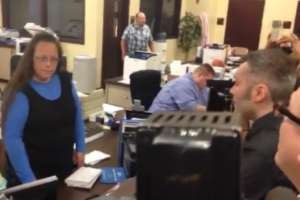 Her refusal comes a day after the Supreme Court denied her request to block a judge's ruling ordering her to issue marriage licenses to all qualified couples.

(Related: According to The Washington Post, Davis appeared briefly at the counter. She said that she was not issuing any marriage licenses.

When asked, "Under whose authority?" Davis answered, "Under God's authority."

Rather than serve gay and lesbian couples after the Supreme Court struck down gay marriage bans in all 50 states, Davis stopped issuing marriage licenses to all couples.Four couples, two of whom are gay, filed a lawsuit.

If Davis does not comply with the order, she could face fines or jail time.