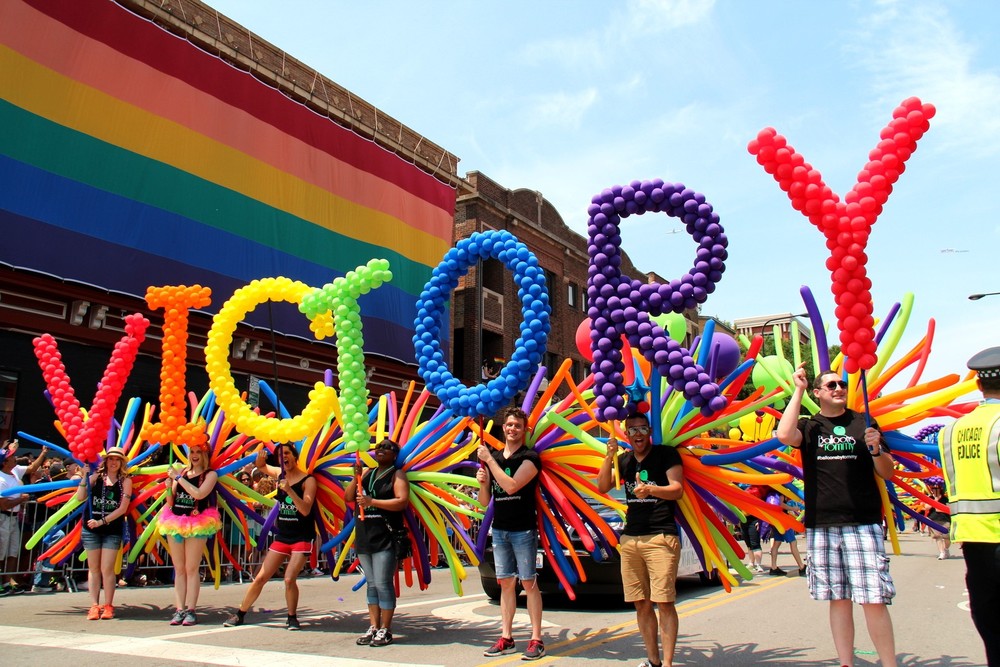 Several incidents halted the parade, which lasted over 4 hours; 52 parade-related arrests were made

Chicago, IL - Hundreds of thousands of people turned out for the 46th annual Chicago Pride Parade as spectators crowded the streets, rooftops and balconies from Uptown to Boystown to celebrate gay pride on Sunday.

The Chicago Office of Emergency Management estimated 1 million people attended the parade. This year's crowd was bolstered by the U.S. Supreme Court decision on Friday to recognize same-sex marriage nationwide.

The festive and colorful parade, which included 200 contingents, was tightened this year by organizers in hopes of shortening the parade. However, the parade ended up lasting over four hours after a number of delays, including a sit-in by a dozen #BlackOutPride activists that caused a 10 minute disruption.

Another delay occurred around 2:50 p.m. when a man drove his car onto the parade route near Halsted and Waveland Ave. Police smashed the windows when the driver did not heed instructions to stop. Two people were injured. The 60-year-old driver was treated at a nearby hospital and later released without charges.

The parade kicked-off at noon with the color guard headed up by the "Scouts For Equality" who carried several flags including the United States, State of Illinois, Cook County, City of Chicago and the rainbow Pride flags. Out country singer and activist Ty Herndon served as Grand Marshal.

Marriage equality played a big part of this year's parade, from Sears' 'Welcome Home' to Sidetrack's 'Marriage Wins' themes. The 'Victory" balloon presentation by Balloons by Tommy was also a crowd favorite, where it proved popular on Instagram.

"We planned on having the 'Chicago' letters and made it earlier in the week," Tommy DeLorenzo of Balloons By Tommy told ChicagoPride.com. "When we heard the news of marriage equality passing on Friday we knew we had to do something. We chose to also create 'Victory' to celebrate this huge step forward for equality."

But there was more exciting moments for the energetic crowds. The Stanley Cup made its second appearance in the Chicago Pride Parade aboard the WGN Radio float and hosted by the Chicago Gay Hockey Association.

Mayor Rahm Emanuel, former Gov. Pat Quinn, U.S. Sen. Mark Kirk (R-Illinois) and one of his challengers, Rep. Tammy Duckworth (D-Illinois), were among the many politicians in the parade.

Chicago Police said there were 52 arrests related to the parade and post-parade activities. These numbers and other factors will be used by city officials to determine if the parade returns to Boystown next year.