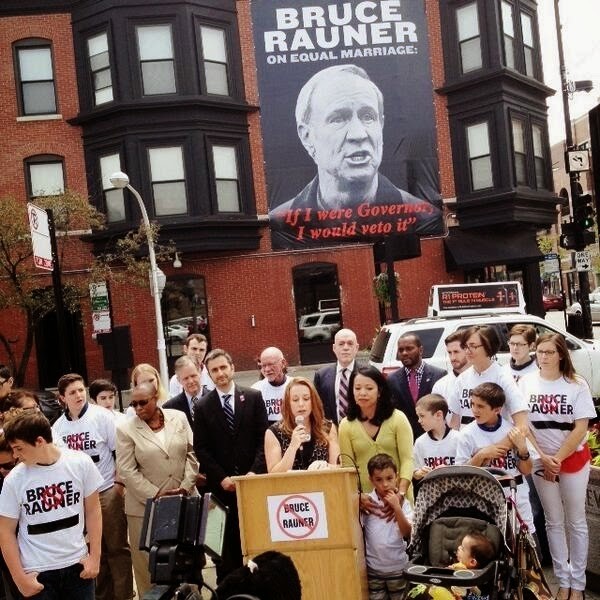 "I am very disappointed to hear that Governor Rauner is speaking at tonight's event," Ed Diffin posted on Equality Illinois' Facebook page. "He has not been good to our community. His proposed social service cuts will be devastating to organizations that serve those with HIV. He does not deserve a place of honor during Pride month. I'm a loyal supporter of your organization, but this really causes me to question your judgment."

Diffin is one of many people to post displeasure. To each negative post, Equality Illinois has responded with this message:

"Equality Illinois has been absolutely clear in standing up by ourselves and in a broad coalition against the proposed budget cuts to critical services. Hundreds of thousands, if not millions, of Illinoisans - including disproportionately LGBT individuals - rely on those services.

"However, we have also worked on making advances in other areas, including strict compliance with nondiscrimination and anti-bullying laws. We are currently working with the governor to sign three bills: 1. Add transgender individuals to Illinois hate crime laws and protect LGBT institutions from vandalism and violence; 2. Protect LGBT youth from conversion therapies; and 3. Protect transgender individuals in their funeral and burial arrangements.

"For tonight's reception, we have invited all statewide officials and lawmakers - Democrat and Republican alike. We have no shortage of disagreements, and we do not hide them. But we believe that to make progress at least in some areas requires collaboration even in the face of disagreements on other moral, critical issues."

"We do not need to invite Rauner into our community for a pride event," Baim posted on Facebook. "There are more appropriate times to try and work with those who would seek to devastate resources needed to serve the less fortunate among us. But Pride is not a time to break bread with someone who will cause great harm to many in this state if these cuts go through."

In March, Gov. Rauner held what was described as a "first of its kind meeting" with LGBT leaders, including Cherkasov. Rauner committed his administration to strict enforcement of non-discrimination laws and suggested an openness to new initiatives.

"We commend Gov. Rauner for taking these steps. They are a good start to our relationship and lay the groundwork for defending the hard-won protections we have achieved," Cherkasov said of the meeting.

EQIL confirmed that a brief program will include remarks by Gov. Rauner. 'Equality Illinois Tribute Reception: A Taste of Pride' is being held on Thursday, June 25 from 6 - 9 p.m. at 300 E. Randolph St. in downtown Chicago.