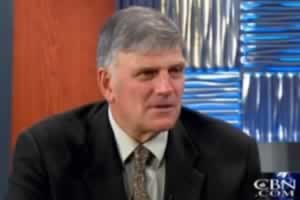 Last week, Graham, the son of evangelist Billy Graham and head of the Billy Graham Evangelist Association, vowed to shun such businesses in a Facebook post.

"Have you ever asked yourself – how can we fight the tide of moral decay that is being crammed down our throats by big business, the media, and the gay & lesbian community? Every day it is something else! Tiffany's started advertising wedding rings for gay couples. Wells Fargo bank is using a same-sex couple in their advertising. And there are more," Graham wrote.

Appearing on the Family Research Council's (FRC) Washington Watch radio program, Graham announced that he will be switching his business account to BB&T Bank, which is also based in North Carolina.

"At Billy Graham Evangelistic Association, we're closing our accounts at Wells Fargo and moving it to another bank here in North Carolina, BB&T. That is, a good bank," he said.

Right Wing Watch points out that BB&T ranks high (80%) on the Human Rights Campaign's (HRC) Corporate Equality Index (CEI), a measure of a company's support for LGBT rights. BBT&T is also the sponsor of this year's Miami Beach Gay Pride Parade and the chief sponsor of the parade's Legacy Couples program, which celebrates same-sex couples in "committed relationships of 10 years or longer."