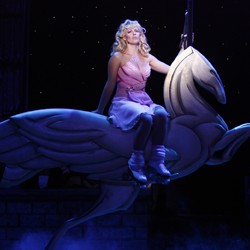 photo credit // carol rosegg
Smashing records on Broadway, Xanadu, the hit musical based on the 1980's classic flick is now calling Chicago home. Director Christopher Ashley and the show's star, Elizabeth Stanley stop by and discuss how Xanadu reaches such a cross generational audience and their challenge making a musical out of the cult movie as well the Xanadu's large gay following.

This wildly funny musical delivers a surprisingly touching story about the nine magical muse-daughters of Zeus, who come to earth in 1980 (disguised in roller skates, leg warmers and Australian accents) to inspire humans to create truly great work and discover the meaning of the universe's greatest secret: the Gift of XANADU. Zeus' most important decree is they can't fall in love with any mortals! But all that changes when the young Kira (Elizabeth Stanley) meets the handsome artist Sonny (Max Von Essen), who needs her help in achieving his greatest dream. It is only when Sonny teaches Kira the true meaning of inspiration, that the secret of XANADU is revealed!

With a book "ingeniously adapted" (New York Times) by Douglas Carter Beane, and a score by Jeff Lynne (writer and producer for the Electric Light Orchestra (E.L.O.)) and John Farrar (responsible for most of the hits performed by Olivia Newton-John in the 1970's), XANADU features the top 20 Billboard hits, "Magic," "Xanadu," "All Over the World" and "I'm Alive." Award-winning Christopher Ashley directs "at roller-derby speed" (New York Times) with choreography by Dan Knechtges.

Ticket prices are $25 to $87.50 and may be purchased at the Drury Lane Theatre Water Tower Place Box Office (175 E. Chestnut St.); any Broadway In Chicago Box Offices (24 W. Randolph St., 151 W. Randolph St., and 18 W. Monroe St.); The Broadway In Chicago Ticket Line at (312) 902-1400; all Ticketmaster ticket centers (including select Carson Pirie Scott stores, Hot Tix, select Coconuts and fye stores); and online at www.BroadwayInChicago.com. Groups of 20 or more can make reservations by calling (312) 977-1710. For more information on XANADU, visit www.XanaduOnBroadway.com or www.BroadwayInChicago.com