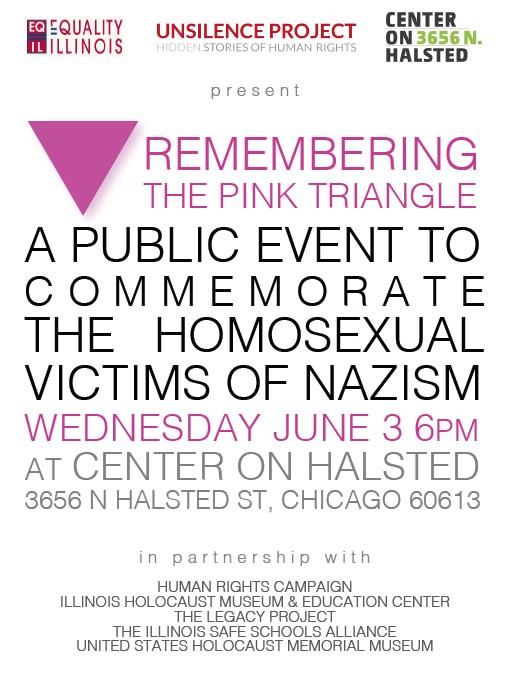 Chicago, IL - Survivors of Nazi camps will be among the speakers at Remembering the Pink Triangle, an event to commemorate the often forgotten homosexual victims of Nazism.

"Homosexuals have largely been marginalized in the remembrance of Nazi persecution. It was only in 2002 that the German government recognized them as the Nazis' victims," said Bernard Cherkasov, CEO of Equality Illinois, which is presenting the event, along with Unsilence Project and Center on Halsted.

"Finally, in 2005, the European Parliament adopted a resolution that called on 'member states... to accord full recognition to homosexuals as targets and victims of the Nazi regime. 'Remembering the Pink Triangle seeks to shine light on this piece of history," he said.

Among the scheduled speakers are Magda Brown, a Holocaust survivor who was imprisoned first in Auschwitz and then Buchenwald, and Stanley J. Jenczyk, who was born in a German workers camp during the war and is now active in the Chicago Chapter of American Veterans for Equal Rights.

During the program, the stories of three gay men victimized by the Nazis will be read, followed by a talk by Dr. Danny M. Cohen, a Northwestern University specialist on Holocaust education and founder of Unsilence Project, who will discuss why the victimization of homosexuals by the Nazis is often forgotten.

"There are a number of factors that have led to the marginalization of homosexual victims from Holocaust history," said Dr. Cohen. "Ongoing government-led persecution of LGBT people around the world, as well as enduring homophobia in society, prevented thousands of gay survivors of the Nazi regime from telling their stories."

As part of the program, The Legacy Project, which oversees the streetscape along Halsted Street that showcases historic LGBT figures, will dedicate a plaque to commemorate the homosexual victims of Nazism.