LGBT veterans to be honored with monument in national cemetery 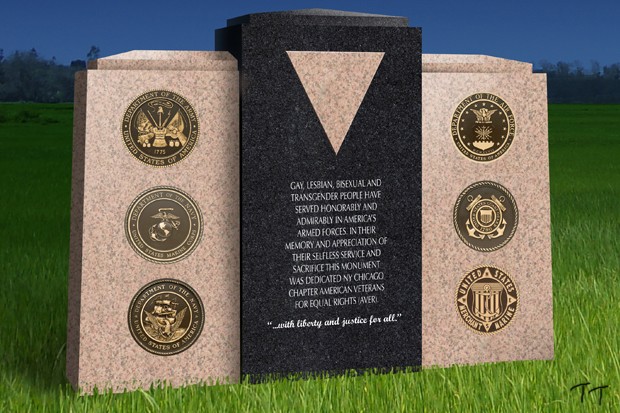 The monument was made possible by the Chicago Chapter American Veterans for Equal Rights (AVER). It is intended to redress the history of disregard and disrespect for LGBT veterans with a lasting symbol of recognition.

LGBT service members have served throughout the history of the U.S. military, some of that time under an outright ban supported by regulation and some under Don't Ask, Don't Tell (DADT), a policy supported by law.

DADT was instituted by President Bill Clinton in late 1993, after the long-time anti-gay policy was challenged and became an issue of public debate. Before the Don't Ask, Don't Tell Repeal Act of 2010 was signed into law by President Barack Obama, nearly 14,000 services members were discharged. Work on open trans inclusion continues today as does work to reexamine and upgrade discharges made under DADT.

The monument will consist of a black granite center block holding a pink granite triangle, centered in a pink granite wall displaying, in bronze, the service seals of the Army, Marines, Navy, Air Force, Coast Guard and Merchant Marines. It will read: "Gay, lesbian, bisexual and transgender people have served honorably and admirably in America's armed forces. In their memory and appreciation of their selfless service and sacrifice, this monument was dedicated by Chicago Chapter American Veterans for Equal Rights 'AVER' ( ...with liberty and justice for all )."

The monument design and approval was spearheaded over several years by Stanley J. Jenczyk, junior board member of the Chicago chapter of the American Veteran's for Equal Rights ( AVER ) and was approved late last year by Ronald E. Walters, interim undersecretary for memorial affairs.

The ceremony will take place at 2 p.m. along and within the Memorial Walkway and will feature music by the Chicago Gay Men's Chorus; blessings from Rabbi Cindy Enger, Fr. Chris Myers and Rev. Wayne Bradley; remarks from elected officials, including former Governor Pat Quinn and U.S. Rep. Robin Kelly, and a Flag Line led by members of Organized Chaos Chicago ( OCC ), some of whom are active duty or veterans of the military.

A free bus will be provided, boarding at 11:30 a.m. at the Center on Halsted on a first-come, first-served basis. Those wishing to ride may RSVP to jamesdarby@aol.com or (773)752-0058. No RSVP is needed to attend the ceremony.