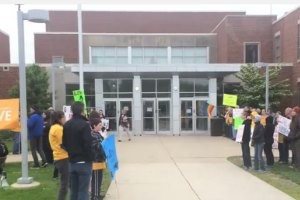 Mike Huckabee and Rick Santorum on Monday attended an event sponsored by an Iowa group opposed to marriage equality.

The Family Leadership Summit held at the Cedar Falls High School was sponsored by the Cedar Valley Patriots for Christ and The Family Leader, which continues to push lawmakers to approve a constitutional amendment limiting marriage to heterosexual couples six years after the Iowa Supreme Court struck down the state's restrictive marriage ban as unconstitutional.

More than 100 demonstrators gathered outside the school to greet the Republican presidential hopefuls.(Huckabee recently declared his candidacy, while Santorum is expected to enter the race.)

"The tide is changing," Eric Giddens, one of the protesters, told The Guardian."Gay marriage is legal in Iowa now and we want to keep it that way, so we feel like we can't let our guard down in case these kinds of folks come in."

Inside the school, Huckabee told a similar-sized audience that he welcomed the protesters' freedom of speech – "I don't fear that people can protest my views" – and warned that allowing gay couples to marry would lead to the "criminalization" of the Christian faith.

Huckabee repeated his claim that states can – and should – ignore the Supreme Court if it strikes down state bans on gay marriage next month.

"I didn't come tonight to give you a speech; I came to sound the alarm," Huckabee concluded.