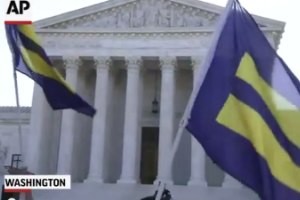 The Supreme Court on Tuesday appeared deeply divided as it heard arguments in a case challenging gay marriage bans in four states.

The case sprung from the high court's 2013 ruling striking down the Defense of Marriage Act (DOMA), which led to the federal government recognizing the marriages of gay couples. Federal judges cited the ruling as they struck down state bans. But rulings from Ohio, Kentucky, Tennessee and Michigan were overturned when they reached the Cincinnati-based Sixth Circuit Court of Appeals. Plaintiffs turned to the Supreme Court, which agreed to hear the cases as one.

Out the gate justices sounded skeptical and as the hearing proceeded increasingly divided.

"This definition has been with us for millennia," said Justice Anthony Kennedy, considered the swing vote."And it – it's very difficult for the court to say, 'Oh, well, we – we know better.'"

Mary Bonauto, a lawyer representing the plaintiffs, responded: "Well, I don't think this is a question of the court knowing better. When we think about the debate, the place of gay people in our civic society is something that has been contested for more than a century."

Kennedy, however, also challenged John Bursch, the lawyer representing opponents of marriage equality, stating that the children of a gay couple could suffer if their parents were denied the dignity of marriage.

"We're talking about something that's going to change the meaning of the institution over generations," Bursch argued. "And, you know, you have things like no-fault divorce where we tweaked what marriage means, and it had consequences over the long term that some people didn't expect. ...Ideas matter, your Honor, and, you know, the out-of-wedlock birthrate ..."

"But that assumes that same-sex couples could not have the more noble purpose, and that's the whole point," Kennedy interrupted. "Same-sex couples say, of course, we understand the nobility and the sacredness of the marriage. We know we can't procreate, but we want the other attributes of it in order to show that we, too, have a dignity that can be fulfilled."

Justice John Roberts Jr. suggested that denying a gay couple a marriage license was "a straightforward question of sex discrimination."

"I mean, if Sue loves Joe and Tom loves Joe, Sue can marry him and Tom can't," Roberts said. "And the difference is based upon their different sex. Why isn't that a straightforward question of sexual discrimination?"

The proceedings were interrupted by a protester yelling, "If you support gay marriage, you will burn in hell!" The man continue to shout as police escorted him out of the building.

After the hearing, lawyers and plaintiffs spoke to the media.

Greg Bourke, who wants his 2004 marriage to Michael Deleon to be recognized by Kentucky, said it would have been easier for his family to move to another state.

"But we are proud Kentuckians and we don't feel like we should have to leave our state just so that we can get the same treatment that other couples get in other parts of the country," he said.

A ruling is expected in June.