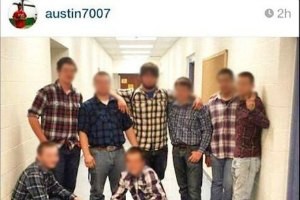 According to BuzzFeed News, the event took place on Thursday, a day after McGuffey High School's Gay-Straight Alliance (GSA) held a "Day of Silence" to protest anti-gay bullying.

Students wore flannel shirts, wrote "anti-gay" on their hands and stuck Bible versus on the lockers of openly LGBT students.

"People started getting pushed and notes were left on people's lockers," Zoe Johnson, a 16-year-old bisexual student, told BuzzFeed News. "I got called a dyke, a faggot. They were calling us every horrible name you can think of."

"The instigators, the bullies, seemed to be very proud of their efforts, and posted many smiling pictures online," said Kathy Cameron, chair of the board of directors of the Washington County Gay-Straight Alliance.

Cameron said that a noose was visible in one classroom and that a "lynch list" of student who had participated in Wednesday's Day of Silence was circulated.

In a statement released to BuzzFeed News on Monday, superintendent Erica Kolat said that no witness to the "lynch list" had come forward and promised a thorough investigation.

"On Thursday, April 16, 2015, allegations of harassment were brought to administrators' attention following the McGuffey High School Gay-Straight Alliance Club's observance of GLSEN's 'Day of Silence.' Administration and school police officers have been investigating all allegations and continue to do so," Kolat said.

"At this time, no witnesses have seen the rumored 'lynch list' that was mentioned in previous news reports. Additionally, no statements have included physical harassment," she added.