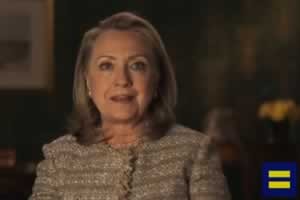 Presidential candidate Hillary Clinton on Wednesday called on the Supreme Court to strike down state bans on gay marriage.

In a statement given to the Washington Blade, campaign spokesperson Adrienne Elrod said: "Hillary Clinton supports marriage equality and hopes the Supreme Court will come down on the side of same-sex couples being guaranteed that constitutional right."

After she left her post as secretary of state in 2013, Clinton recorded a 6-minute video for the Human Rights Campaign (HRC) in which she endorsed marriage equality for the first time.

"I support marriage for lesbian and gay couples," she said in the video.

During a contentious interview over the summer with Fresh Air host Terry Gross, Clinton said that the issue is best handled by the states.

"For me, marriage had always been a matter left to the states," Clinton said. "And in may of the conversations that I and my colleagues and supporters had, I fully endorsed the efforts by activists who work state-by-state and in fact that is what is working."

(Related: Hillary Clinton annoyed as Terry Gross tries to pin down her views on gay marriage.)