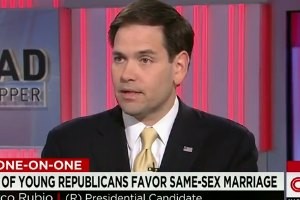 In announcing his bid for president, Rubio criticized Hillary Clinton as "a leader from yesterday" who is "promising to take us back to yesterday."

The Lead's Jack Tapper noted a Pew poll which shows that a large majority (61%) of Republicans under 30 support marriage equality.

"On that issue, same-sex marriage, Senator, you're the candidate of yesterday," Tapper stated.

Rubio defended his opposition by saying that states, not the federal government or courts, should decide the issue.

"I think there's still a significant number of Americans that believe that the definition of marriage should be that of one man and one woman, as it has been for thousands of years," Rubio added.

"But they're a minority," Tapper noted.

Clinton is the only announced candidate to support equal marriage rights for gay couples, a point she highlighted with the inclusion of an engaged gay couple in her announcement video.