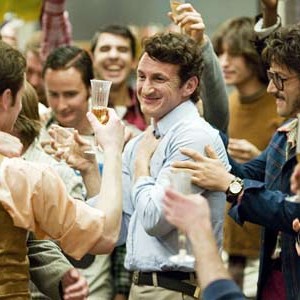 sean penn stars as harvey milk in the movie milk

Los Angeles, CA - The American Film Institute has announced its annual ten official selections for AFI Awards, which recognize the year's most outstanding achievements in film.

This year's list is varied and includes the usual big budget blockbusters, an independent directorial debut which swept Sundance and a daring performance from Sean Penn in Gus Van Sant's powerful biographic portrait of Harvey Milk.

Penn's performance as Harvey Milk, the first openly gay man to be elected to public office in California, has received widespread acclaim from critics and a number of award nominations.

Milk is currently in limited release at theatres nationwide.

The annual honors also acknowledge what the institute regards as significant moments in the world of the moving image.

Juries made up of scholars, film artists, critics and institute trustees make the sections. Unlike other awards bodies, the institute does not rank films or pick one as the year's best.

The institute will honor the creators of the selected movies and TV shows at a Jan. 9 luncheon in Los Angeles.