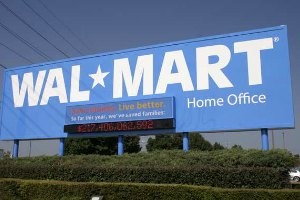 Little Rock, Arkansas - Walmart, the world's largest retailer, has asked Republican Arkansas Governor Asa Hutchinson to veto a bill critics say would open the door to discrimination against members of the LGBT community.

The measure, HB 1228, seeks to prohibit any state and local laws that "substantially burden" a person's ability to follow his or her religious beliefs without a "compelling" interest. The bill defines a "person" to include a company or association.

The Arkansas House on Tuesday gave final legislative approval to the bill.

"Every day in our stores, we see firsthand the benefits diversity and inclusion have on our associates, customers and communities we serve," Walmart CEO Doug McMillon said in a statement. "It all starts with our core basic belief of respect for the individual. Today's passage of H.B. 1228 threatens to undermine the spirit of inclusion present throughout the state of Arkansas and does not reflect the values we proudly uphold. For these reasons, we are asking Governor Hutchinson to veto this legislation."

Walmart, which is headquartered in Bentonville, Arkansas, employs 2.2 million people worldwide and is the world's largest company by revenue, according to Fortune.