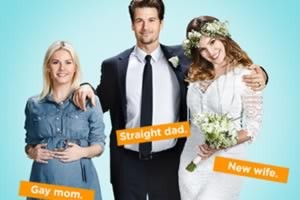 NBC will premiere the lesbian-led comedy One Big Happy on Tuesday.

The show – produced by Ellen DeGeneres – centers around a best friend pairing of a lesbian woman (played by Elisha Cuthbert; Happy Endings) and a straight man (Nick Zano; What I Like About You) who decide to have a baby together. A new kind of family is born when Zano's character marries another woman (Kelly Brook). Entertainment Weekly has already dubbed the show "NBC's next New Normal."

One Big Happy is written and executive produced by Liz Feldman (2 Broke Girls), who is openly gay. Feldman previously put in a two-year stint at DeGeneres' daytime talk show.

According to Deadline Hollywood, NBC ordered six episodes of the sitcom.