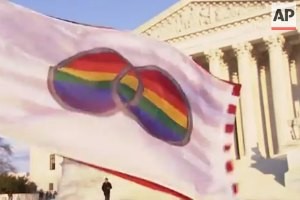 Washington, D.C. - The Obama administration will file a brief this week with the Supreme Court urging it strike down state laws and amendments which exclude gay couples from marriage.

Currently, gay couples can marry in 37 states, plus the District of Columbia. On Monday, a federal judge struck down Nebraska's ban.

The nation's highest court will hear arguments next month in a case challenging bans in four states: Ohio, Tennessee, Michigan and Kentucky.

In an op-ed published Monday, Attorney General Eric Holder wrote that his office's brief in the case will argue that such bans "violate the fundamental constitutional guarantee of 'equal protection of the laws.'"

"It is clear that the time has come to recognize that gay and lesbian people deserve robust protection from discrimination," Holder wrote.

"Nothing justifies excluding same-sex couples from the institution of marriage. Denying them the right to marry serves only to demean them and their children, to degrade the dignity of their families and to deny them the full, free and equal participation in American life to which every citizen is entitled."

Such bans, he added, "inflict concrete harms that touch nearly every aspect of daily life for gay and lesbian couples."